Members of the public were urged to be mindful of calls with the " " prefix - indicating an overseas call. - ST

Those targeted would receive voice-recorded phone calls allegedly from the Ministry of Health, the High Court or other government agencies, the police said.

Following the caller's instructions, victims would be directed to scammers claiming to be police officers.

The scammers would inform the victims that they were being investigated for money laundering and other offences, the police explained in the advisory.

They would then direct the victims to provide their personal and bank account information.

In some cases, the scammers would get their targets to open bank accounts and transfer money from their accounts to others, for "police investigations".

The scammers would also get victims to meet unknown subjects to hand over or collect fake documents and instruct the victims to report their movements daily and keep the "investigations" secret.

On May 26, The Straits Times reported on Chinese scammers impersonating Immigration and Checkpoint Authority (ICA) officers.

The scammers accused a 16-year-old student of being part of a scam syndicate and instructed him to deposit $53,100 into one of the scammers' bank accounts.

When the teenager failed to raise the sum, he agreed out of fear to cooperate with the scammers' scheme to fake his kidnapping.

The police said that those who fell prey to these impersonation scams would discover they had been duped only when they realised there were unauthorised transactions made from their bank accounts, or when the scammers did not return the money they had transferred for the purported police investigations.

The police emphasised that overseas law enforcement agencies have no jurisdiction to conduct operations, arrest anyone or ask members of the public in Singapore to help with investigations.

The police also said they will never ask people to transfer money into another bank account for investigations.

Members of the public were urged to be mindful of calls with the "+" prefix - indicating an overseas call - and ignore unsolicited calls from individuals claiming to be overseas law enforcement.

The police said that members of the public should never share their Singpass, bank account login details, and one-time password with anyone, including family and friends.

They added that no government agency will instruct payment through a telephone call or other social messaging platforms, or ever ask for personal banking information such as i- banking passwords.

The public were advised to always verify information with official websites and sources and if in doubt, call a trusted friend or talk to a relative before acting.

The annual police crime statistics released in February showed that the number of China officials impersonation scams rose from 442 in 2020 to 752 in 2021.

For more information on scams, people can visit scamalert.sg or call the Anti-Scam Hotline on 1800-722-6688. 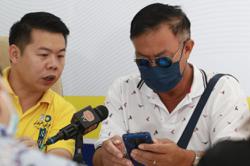