RODRIGO Duterte steps down as president tomorrow after a six-year term marked by a bloody drug war, a devastating pandemic and the worst economic crisis in decades.

The 77-year-old authoritarian firebrand has been succeeded by the son of former dictator Ferdinand Marcos, who was swept to victory in a landslide victory last month.

Here are the key elements of Duterte’s legacy:

Drug war: Duterte was elected in 2016 on a promise to get rid of the Philippines’ drug problem, openly ordering police to kill drug suspects if officers’ lives were in danger.

At least 6,248 people died in police anti-drug operations, official government figures show. But rights groups estimate tens of thousands have been slain by police and shadowy vigilantes, even without proof they were linked to drugs.

The campaign was widely condemned and sparked a probe by the International Criminal Court, but it did little to dent Duterte’s popularity among many Filipinos who welcomed his swift brand of justice.

Under Duterte, efforts to decommission the Milf’s 40,000 fighters and distribute economic aid have sputtered, raising fears that disillusioned Muslim youths could turn towards more hardline militant groups in the poor region.

But in what is seen by some analysts as Duterte’s biggest achievement, he signed a law in 2018 granting greater autonomy to the region – the crucial missing element to the languishing peace pact.

Poverty: Millions of people were lifted out of poverty in the first few years of Duterte’s term as economic reforms by his predecessor Benigno Aquino bore fruit.

But as the pandemic choked the economy, the financial misery of the poor worsened.

The poverty rate shot back up to 23.7% last year in the country of 110 million people.

In the first three months of 2022, 43% of Filipino families reported feeling poor, while 34% felt they were on the “borderline”.

Infrastructure: Financed by taxpayer money and foreign loans, Duterte went on a spending spree with an 8-9 trillion peso (RM642bil to 723bil) “build, build, build” campaign to improve the sorry state of the country’s infrastructure.

Thousands of bridges, classrooms, evacuation centres and roads were built in a flurry of development.

The Department of Public Works and Highways (DPWH) said in the first four years of Duterte’s term, the government was able to “accomplish” 2.5 trillion pesos’ (RM200bil) worth of infrastructure projects.

That compared with 820.4 billion pesos (RM66bil) over the same number of years in the previous administration, it said. But many key projects hit potholes.

The DPWH said recently that 12 out of 119 “infrastructure flagship projects” – which account for more than half of the overall cost of the campaign – have been completed.

Duterte was skewered by critics over an initial shortage of vaccines and glacial rollout of jabs, while successive lockdowns and social distancing rules devastated businesses.

The economy plunged into its first recession in three decades, with millions left jobless.

By May 27, 2022, a total of 70.8 million people had been fully vaccinated and the economy was rebounding after the lifting of restrictions. — AFP 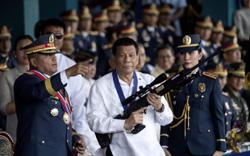