Asia ex-Japan bond funds saw the heaviest net outflow year-to-date in May, as investors were deterred by lower expected returns amid rising US interest rates, with even lower risk paper such as government bonds being shunned.

Net outflows from bond funds totalled US$6.3 billion for the four weeks up to May 25, data from EPFR Global shows. The bulk of redemptions came from investment grade bonds, or those that are rated BBB- and above by ratings agency S&P, and Baa3 and above by rival Moody’s.

The outflow comes as foreign investors cut back their holdings of Chinese government bonds this year, with outperformance in 2021 due to higher, more attractive yield relative to US treasury bonds reversing in 2022, according to fund managers.

Interest rate hikes in the US have historically contributed to outflows from Asian emerging market bonds. But this year an inflationary spiral and growth concerns caused by Russia’s invasion of Ukraine and China’s Covid-19 lockdowns have compounded outflows, said fund managers.

“As financial conditions tighten in the US and Europe - the latter being the biggest buyer of Asia sovereign bonds - investors are focusing on preservation of capital,” said Ales Koutny, emerging markets portfolio manager at UK asset manager Janus Henderson Investors.

Investors are selling Asian assets and reinvesting the capital in highly liquid bonds in their local markets, such as treasury bills, he said. The market currently expects the US Federal Reserve to hike rates to 2.65 per cent by the end of this year, from 0.75 per cent to 1 per cent now.

Outflows from Chinese government bonds stood out, with holdings by foreign investors dropping 203 billion yuan (US$30.5 billion) to 3.48 trillion yuan in the first four months this year, according to ChinaBond data.

Until recently, foreign fund managers were keen to include onshore Chinese government bonds in mutual funds and exchange-traded funds, as the 10-year yuan bond used to pay 3.36 per cent at its peak in late February 2021, compared to a 1.56 per cent yield paid by the US 10-year treasury bond.

That cushy margin disappeared earlier this year, with the Chinese government bond returning less than its US counterpart. Both assets were yielding roughly the same, at around 2.8 per cent, on Tuesday.

The recent Covid lockdowns in China have added to pressures on the Chinese economy. While the central bank has made efforts to ease monetary policy, going forward it will focus less on injecting liquidity through policy rate cuts, said Hong Kong-based Freddy Wong, head of Asia-Pacific fixed income at US investment manager Invesco.

“We expect the [Chinese] central bank’s focus to turn more towards credit easing than liquidity easing down the road, to boost the economy, and this will limit room for further downward moves in government bond yields,” said Wong.

This would be bad news for investors who already own Chinese government bonds in their existing portfolios because if the yield does not drop further, this will ruin prospects for bond prices to appreciate, given the inverse relationship between bond price and yield.

But fund flows may stabilise going into the next few months, as the sharp correction since the first quarter has also brought valuations to more reasonable levels, said Christy Lee, senior fixed income portfolio manager at AXA Investment Managers.

Asia investment grade bonds are now showing more attractive yields compared to their US counterparts, rewarding investors with about 50 basis points more than the latter, although the overall maturities of Asian bonds tend to be shorter, Lee said.

Most investors are expected to continue to stay clear of high yield bonds, particularly after defaults in the Chinese property sector since last year, said Riad Chowdhury, head of Asia-Pacific fixed income at e-trading platform MarketAxess.

“Many global investors might [also] think twice about going into other Asian high yield bonds if they’ve lost money in China high yield,” he said. 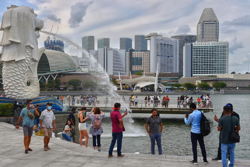