PYONGYANG (Bloomberg): Kim Jong-un (pic) congratulated Queen Elizabeth II on the anniversary of her ascension to the throne, as the young North Korean leader sent his first public message to the 96-year-old monarch.

"I extend my congratulations to you and your people on the occasion of the National Day of your country, the official birthday of Your Majesty,” North Korea’s Foreign Ministry said of the note that was sent Thursday (June 2) from its 38-year-old leader.

Pyongyang sent greetings to Queen Elizabeth after North Korea and the UK established diplomatic relations in 2000. Most were dispatched from the cadre who served for decades as the president of the presidium of the Supreme People’s Assembly, Kim Yong-nam. He started off in 2001 and "wished the Queen good health and happiness,” on the occasion of her official birthday.

The exchange of greetings took a turn last year when Queen Elizabeth sent a congratulatory note to Kim Jong-un for a national day celebration. While a Buckingham Palace spokesperson told CNN such a message had "been done before,” a database search indicated it was the first time the message was mentioned in North Korea’s official media.

Queen Elizabeth, who saw a parade featuring soldiers on horseback and a flyover by military aircraft as part of the festivities, will skip a national thanksgiving service Friday due to "some discomfort,” the Guardian reported.

Kim Jong-un, who in recent weeks has been busy trying to stamp out a Covid wave that may have stemmed from a military parade in Pyongyang, has not been seen in public for several days. His luxury yacht appears to have travelled from a marina at his mansion to a secluded island, specialist service NK News reported Thursday, citing satellite imagery. 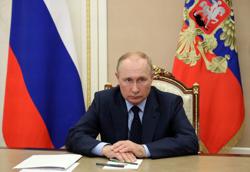