One of the missiles launched by North Korea on May 25, with an estimated range of about 15,000km, was enough to reach the United States. - Reuters

TOKYO (Reuters): The US military and Japan's Self Defense Force said on Thursday (May 26) they flew fighter jets together over the Sea of Japan in a show of strength after North Korea lobbed three missiles into the waters that separate Japan and the Korean peninsula.

The exercise was meant to "showcase combined capabilities to deter and counter regional threats", the US military said in a news release. Japan and the United States wanted to show their combined resolve in the wake of North Korea's latest missile launches, two US officials told Reuters, speaking on condition of anonymity.

North Korea on Wednesday spurred fresh tensions in East Asia when it fired three missiles into the Sea of Japan hours after US President Joe Biden left Tokyo following meetings with leaders from Japan, India and Australia.

One of the missiles, according to South Korean officials, appeared to be Pyongyang's largest intercontinental ballistic missile (ICBM), with an estimated range of about 15,000km, enough to reach the United States.

The flight of eight aircraft from bases in Japan included four American F-16 jets and four Japanese F-15 fighters, according to Japan's Air Self Defence Force. 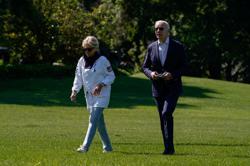