MANILA (Philippine Daily Inquirer/Asia News Network): President-elect Ferdinand Marcos Jr (pic) on Thursday (May 26) made a pitch for proper collection of taxes and tariffs, saying the economy will languish if the government’s tax collection agencies won’t step up its revenue system.

Speaking in a sit-down interview where only a few select media were present, Marcos said the Bureau of Customs (BOC) and the Bureau of Internal Revenue (BIR) must ensure the proper collection of taxes and duties in order to balance the demand for funds to bankroll government programmes.

“The economy of the Philippines will simply not succeed, we cannot collect duties, tariffs, etc through the BOC and we do not have good collection on taxes both on the national and local level. The numbers don’t match,” he said.

“So that’s why it’s very, very important and we have to at the very least reduce the corrosive influence of corruption in government as a general rule,” he added.

Marcos’ family has been dogged by issues of non-payment of their P203 billion estate tax liability, as well as his own failure to file his income tax returns while governor of Ilocos Norte from 1982 to 1985.

During the interview, the President-elect has also refused to discuss past issues of corruption.

But he clarified that they will go after erring officials. “If there are still corrupt individuals, we will go after them because we won’t succeed,” he added. 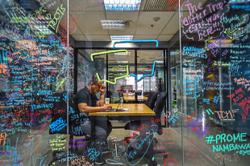