In this file photo taken on April 5, 2022, Thailand's former transport minister Chadchart Sittipunt (left) speaks with residents as he campaigns as an independent candidate in the upcoming Bangkok gubernatorial election, in Pathum Wan district in Bangkok. The capital goes to the polls on Sunday (May 22) to choose a new governor for the first time in nearly a decade, with the front-runner promising to clean up the congested, polluted, flood-prone megalopolis. - AFP

BANGKOK, May 20, 2022 (AFP): Millions of Bangkok voters will elect a new governor on Sunday (May 22) in the first major polls since pro-democracy protests rattled Thailand's capital, with a former minister ousted in the 2014 military coup leading the race.

The poll comes as embattled Prime Minister Prayut Chan-O-Cha fights to hold his ruling national coalition together until a general election due within 12 months.

The bustling, traffic-clogged metropolis of 10 million people last elected a governor in 2013. After seizing power as military chief in 2014, Prayut sacked the incumbent and appointed his own man.

Leading the 30-strong field of candidates is Chadchart Sittipunt, a former transport minister in the civilian government kicked out of office in the most recent of the dozen coups to upend Thai politics since the birth of democracy in 1932.

He is running as an independent and says Bangkok voters want to move on from the entrenched tribal fault lines that have dominated Thai politics in recent years.

"You have many people in Bangkok who are fed up with politics as usual," he told AFP.

But the 55-year-old was a major figure in Pheu Thai -- the opposition party of controversial billionaire former prime minister Thaksin Shinawatra -- running as its candidate for prime minister in 2019.

While Chadchart insists on his independence, Pheu Thai has not fielded a candidate against him, leading some to view him as a proxy for the party.

Opinion polls, meanwhile, put him well ahead of the incumbent Governor Aswin Kwanmuang, a former police general backed by Prayut.

Chadchart has pushed a liberal vision for Bangkok that includes tackling its notorious traffic jams and reducing pollution, as well as expanding green spaces in the concrete-dominated urban landscape with a promise to plant a million trees in four years.

Low-lying Bangkok, on a tidal river, criss-crossed with canals and sinking into the marshy ground on which it is built, is highly vulnerable to the effects of climate change.

Flash floods are common in the rainy season as the city's drains struggle to cope with the tropical downpours.

"I think many people feel that the quality of life has worsened during the last 10 years," he said.

Chadchart has not expressed a clear view on the 2020 demonstrations, which at their peak saw tens of thousands pour onto the streets of Bangkok to demand Prayut quit and make unprecedented calls for reforms to the monarchy.

But after authorities were criticised for cracking down heavy-handedly with tear gas, rubber bullets and water cannon, he has indicated he would like to see a softer response in future.

While urban, affluent Bangkok is very different from most of Thailand -- poorer, agricultural and less educated -- some analysts see Sunday's poll as a foretaste of the upcoming national election.

Political analyst Thitinan Pongsudhirak of Chulalongkorn University said the outcome would give some idea of the capital's willingness to back candidates of the royalist and military establishment that dominates Thai politics.

"Bangkok is not Thailand, but the Bangkok governor election this time will be a bellwether for bigger polls to come," he told AFP.

For Chulalongkorn University student Kamolwan Ingsakunsuk it is Chadchart's plans, not his political allegiance, that means he will have her vote on Sunday.

"When I listen to his policies and his comments on TV, I feel he knows the problems and his policies could solve some problems," the 23-year-old said.

"I feel like at least it could be a starting point." - AFP 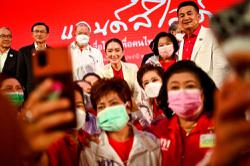