HANOI, May 16 (Xinhua): Vietnam recorded 1,550 new Covid-19 cases on Monday, down by 46 from Sunday, according to its Ministry of Health.

Among the new infections, only two were imported and the rest were domestically transmitted in 48 provinces and cities.

More than 217 million doses of Covid-19 vaccines have been administered in the country, including nearly 197.1 million shots on people aged 18 and above, said the ministry.

Vietnam has by far gone through four Covid-19 waves of increasing scale, complication, and infectivity.

As of Monday, it has registered nearly 10.7 million locally transmitted Covid-19 cases since the start of the current wave of infections in April 2021, said the health ministry.- Xinhua 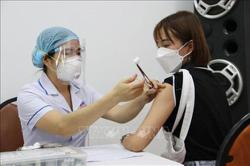