MANILA, May 16 (Reuters): Emerging stock markets in Asia kick-started the week on a firmer footing, even as shockingly weak data from China stoked further concerns about a slowdown in the world's second-largest economy.

Data released last Thursday showed the Philippine economy grew at a better-than-expected 8.3% in the first quarter, increasing the likelihood of a rate hike to tackle inflation as early as the next central bank meeting on May 19.

Shares in India, which rose more than 1% in early trade, pared gains to be up 0.3% after five consecutive weeks of losses. Taiwanese stocks advanced 0.4%.

Equity and currency markets in Thailand, Malaysia and Indonesia were closed for holidays. Singapore's stock market was also closed. The Indian rupee did not trade for the day.

Economic activity in China cooled sharply in April as extensive lockdowns took a heavy toll, adding to fears the economy could shrink in the second quarter.

Full or partial lockdowns were imposed in dozens of cities across the country in March and April, but Shanghai has now set out plans for the return of more normal life from June 1.

"The April data slate combined with other softer data over the month paint a picture of a stalling economy and one in need of more aggressive stimulus and a rapid easing of Covid restrictions," Mitul Kotecha, head of emerging markets strategy at TD Securities, said in a note.

"As such, China's weaker growth trajectory will add to pressure on its markets, and fuel a further worsening in global economic prospects, weighing on risk assets."

Chinese stocks were down 0.3%, while the yuan depreciated 0.2% and was hovering near a 20-month low against the dollar.

Currencies in Asia were marginally weaker against broad dollar strength, with market participants awaiting key US retail and production data due on Tuesday, as well as speeches from several Federal Reserve officials in the week ahead. - Reuters 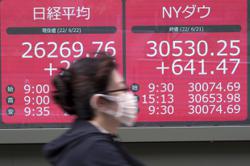 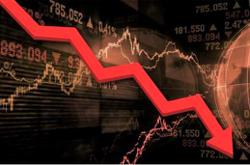