MANILA (Bloomberg)" Ahead of his landslide election win on Monday, Ferdinand Marcos Jr gave few specifics on how he would govern the Philippines. But a private dinner he attended soon after entering the race last October may provide clues on his priorities -- and to whom he’s beholden.

Joined by Sara Duterte, the president’s daughter who would later become his running mate, Marcos Jr sat down with the powerful family that controls most key positions in the tourist hotspot of Cebu, which has more voters than any of the nation’s 81 provinces outside the capital.

Sharing laughs over wine, Governor Gwen Garcia (pic) -- known as the "Iron Woman of Cebu” -- came away impressed with the only son of former dictator Ferdinand Marcos.

For Garcia, 66, endorsing the man known as Bongbong wasn’t an easy decision. Her father was an opposition lawyer who stood up against his father’s regime before it ended abruptly in 1986. The clan didn’t back Marcos Jr, 64, when he ran for vice president six years ago -- a decision that cost him the election.

But this time around Garcia saw Marcos Jr as the candidate most likely to deliver two benefits in particular that were more valuable than settling old scores: More money for infrastructure projects, and greater autonomy from the political class in Manila. And on Monday, Cebu was among the places that helped Marcos Jr. win the presidency with the biggest share of the vote since his father won a boycotted election in 1981.

"He will certainly be helping us insofar as tourism infrastructure is concerned,” Garcia said in an interview days before the election at her office in Cebu City, when asked what she expected from Marcos Jr.

"But I would really be very, very appreciative if we could finally get ahead on federalism,” she added.

"We would wish for that kind of autonomy.”

Marcos Jr’s resounding victory shows just how powerful family dynasties like the Garcias remain in a nation with a front-row seat to tensions between the US and China.

The former American colony has had a mutual defence treaty with the US since the 1950s and sits on the doorstep to Taiwan, making it a crucial player in any potential conflict with China.

Yet most elections in the Philippines are decided by local fiefdoms with narrow interests. Although runner-up Leni Robredo, 57, drew historic crowds in the final weeks of a campaign focused on fighting corruption, ultimately it proved no match Marcos Jr.’s patchwork of alliances with local leaders in the nation of 110 million people.

The question now is how much Marcos Jr will give back to the clans that supported him. While the Philippines is forecast to be among South-East Asia’s best-growing economies this year, one of Asia’s fastest inflation rates threatens to further hurt households that saw incomes decline with the pandemic. A quarter of the population lives in poverty, and the World Bank warned that number could jump as food prices rise.

Running on a broad slogan of "unity,” Marcos Jr. has said he’ll keep most of President Rodrigo Duterte’s economic policies, which for the most part were left to technocrats to design and implement. The Philippines maintained the investment-grade credit rating it won in 2013 even as Duterte announced a "Build! Build! Build!” program that more than doubled infrastructure spending to upwards of US$20 billion per year.

The problem for the next administration, however, is finding more revenue to keep the program growing without blowing out the budget, according to Christian de Guzman, senior vice president of the Sovereign Risk Group at Moody’s Investors Service.

"I’m not sure if there’s any low-hanging fruit just because of the situation that we find ourselves in,” he said.

"There is indeed a need to narrow the fiscal deficits and stabilise the debt.”

Marcos Jr’s attention has been primarily focused on building the political alliances he needed to pull off Monday’s victory. After sealing a deal with the Dutertes, who remain the most popular political figures in the Philippines, Marcos Jr also secured endorsements from parties affiliated with other former presidents, including Gloria Macapagal-Arroyo and Joseph Estrada -- both of whom faced plunder charges after leaving office.

Marcos Jr can also thank his dad for some help. The elder Marcos appointed the father of Victor Remulla, governor of vote-rich Cavite province south of Manila, back in 1979 -- and the family is still loyal to this day.

Speaking by phone, Remulla said he became convinced Marcos Jr had a firm grasp on policy and economic management during conversations between the pair that lasted up to 90 minutes. The 54-year-old politician also defended the country’s dynastic politics, saying it ultimately comes down to delivering for voters.

"Fat dynasties are hindered by the complacency of leadership,” he said.

But clans have become even more entrenched since then: a 2019 study found that dynasties held four in five governor posts after mid-term elections that year, compared with 57% in 2004. They also controlled two-thirds of seats in congress, up from just under half during the same period, a phenomenon scholars blame for contributing to one of Asia’s highest income inequality rates.

Marcos Jr opponents see his victory as the culmination of a disinformation campaign on social media that had followers believing his father’s dictatorship was a golden age for the Philippines. And they fear he’ll use his power to sort out his own legal troubles, including ending the official search for some $10 billion allegedly siphoned during his father’s two-decade rule, clearing up a $4 billion estate-tax dispute and keeping Imelda Marcos, his 92-year-old mother, from serving jail time.

Down in Cebu, Garcia is hopeful that Marcos Jr will give her family and others more power, even as leaders around the world often back away from such promises when entering office. She expressed disappointment in Rodrigo Duterte, who dropped proposals to implement a U.S.-style federal structure where regions can impose taxes and make decisions on things like movement restrictions during the pandemic. Marcos Jr. has so far remained non-committal on the topic.

"Choose some bright spots, start with three or four that have already shown their capability in handling affairs on their own,” Garcia said, adding that Cebu was ready to be a federal state. "Suggestions are welcome, but we know the situation on the ground.”

In a small Cebu fishing village, Marcos Jr supporter Rene Casqueso has much more modest expectations: The construction of community hospitals and more doctors in small towns. The 43-year-old carpenter has struggled to maintain work during the pandemic, and his family has largely subsisted on whatever they catch.

"I’m not sure if he understands the plight of the poor, but what I saw was he would meet with the labourers,” Casqueso said about Marcos Jr, as he perched in shallow coastal waters near his home.

"I think he has a new way for the Philippines to recover and rise again.” 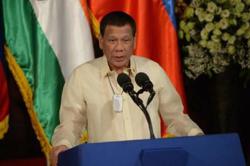