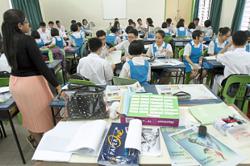 For many Hong Kong expatriates and foreign companies, the impact of the security law was tolerable, or even welcome, as it put an end to months of disruptive protests. - AFP

HONG KONG (Bloomberg): An exodus of expatriates and locals from Hong Kong is poised to intensify in 2022, as policy makers continue their crackdown on civil society and brush off an increasing uproar over aligning with mainland China’s Covid Zero strategy.

A population outflow that was triggered by the 2019 protests deepened last year to a record as the realisation that the city’s strict Covid policies are here to stay sank in, and the impact of the national security law imposed by Beijing continued to roil public life.

The effects of the brain drain in sectors such as education, health care, and even finance will likely be felt by residents for years to come.

"With everything that’s happening in Hong Kong, the strict quarantine rules and the national security law, banks and companies across the broader financial services sector are looking at their footprints in the region and where they want people based,” said Simon Roberts, chairman for Asia at executive search firm Sheffield Haworth.

"If the government’s current zero-Covid policy continues, then come the end of the school year in the summer of 2022, there will be a further mass exodus.”

Still, for many Hong Kong expatriates and foreign companies, the impact of the security law was tolerable, or even welcome, as it put an end to months of disruptive protests.

A more pivotal factor in deciding to leave or stay is the virus strategy, which now is becoming even more draconian, with almost all arrivals requiring 21 days in isolation, large numbers of incoming flights slashed and no timetable on the mainland border re-opening.

Even as big banks shrug off geopolitical tensions and continue to push into China, the data show that the city is losing its appeal.

The number of American firms with regional headquarters continued to shrink, while people are increasingly thinking about relocating to Singapore, which is open for international travel, or even the mainland, as the utility of being based in Hong Kong for access to China wanes.

In the economy, this means more Chinese firms are setting up hubs as those of other countries leave.

In schools, children as young as six are being inculcated with patriotic education.Some of the city’s top academic minds are either leaving Hong Kong universities or academia entirely, while student bodies are becoming dominated by a mainland influx.

Civil society groups such as trade unions and human rights groups are closing in droves or exiting, and pro-democracy media houses are shuttering while journalists are being arrested.

Hong Kong officials have maintained the drumbeat, against mounting criticisms from residents and industry groups, that its strict Covid policy is working, touting the city’s economic recovery.