Focus on safety: A flight attendant wearing a mask for protection against Covid-19 performing a safety demonstration on a flight from Boracay. — Reuters

An official of the Commission on Elections (Comelec) reiterated that unvaccinated Filipinos would be allowed to cast their votes in the May 2022 elections.

She said voters experiencing Covid-19 symptoms after arriving at the polling precincts would be taken to an isolated area to vote.

“Your vote will be counted,” she assured voters.

Guanzon, however, said Congress would have to enact a law authorising mail-in voting before it could allow voters staying in quarantine facilities to participate on Election Day.

“Those in quarantine can’t vote. Sorry. Congress should pass a law allowing voters to vote by mail if they want,” she said.

Comelec spokesperson James Jimenez had also said that making vaccination a requirement for voters was “unlikely”.

“There should be no additional requirements to exercise the right to vote. That is unconstitutional, I think,” Jimenez said.

Comelec earlier said that health protocols would be strictly enforced at all polling centres to prevent the spread of coronavirus during the country’s first pandemic-era national electoral exercise.

Last week, the poll body issued a resolution prohibiting candidates from having physical contact, such as hugging, shaking hands and even posing for selfies with their supporters during the campaign.

It said flouting the stringent campaign guidelines would be considered an electoral offence that might result in the disqualification of candidates. — Philippine Daily Inquirer/ANN 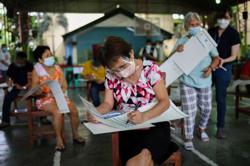