JAKARTA (The Jakarta Post/Asia News Network): Originating from ancient Greek, the word "democracy" means, in essence, people running the country. Since the founding of the People's Republic of China in 1949, state power has been in the hands of the Chinese people who have become the master of the country.

After 70-plus years' of practice and development, China has successfully blazed a path of democracy with distinguished Chinese features, which suits China's national conditions and meets its people's aspirations. It is called the whole-process people's democracy.

The people administer state affairs and manage economic, cultural and social affairs through various channels and in various ways. In practice, more than 99 per cent of Chinese citizens over the age of 18 have the right to vote and stand for election.

Since reform and opening up in the 1980s, the voter turnout has been around 90 per cent in every direct election of deputies to the county- and township-level people's congresses. It ensures the will of the overwhelming majority of the people fully reflected in election results.

Apart from democratic elections, people have the right to participate in the management of national and social affairs in day-to-day political activities.

The whole-process people's democracy is a complete chain, within which, each part, including democratic elections, consultation, decision making, management and oversight, linking with one another.

The whole-process people's democracy has a concrete, complete set of institutions and procedures. Bearing in mind its national conditions, China has established such systems as people's congresses which is the fundamental political system of China, multiparty cooperation and political consultation led by Communist Party of China, regional ethnic autonomy, and grassroots self-governance.

These systems have ensured people running the country and laid a firm institutional foundation for protecting the fundamental interests of the overwhelming majority of the people.

On matters concerning people's keen interests, there are broad-based and sufficient consultations and discussions before any major decision is made. Policies and measures can only be introduced when there is a consensus that they are what the people want and serve the people's interests.

During the five-year compilation of China's Civil Code, the standing Committee of the National People's Congress has sought public opinions on 10 occasions, receiving a total of 1.02 million pieces of advice from around 425,000 people.

People's advice has been taken into full consideration. The whole-process people's democracy works well to ensure that people can realise and improve their interests in a concrete and realistic way.

Democracy is not an ornament used for decorative purposes. It should be used to address concerns of the people.

The whole-process people's democracy flavors substance over form, and rejects "democracy shows" and political dramas. Everything it does is to realise, safeguard and advance the fundamental interests of the overwhelming majority of the people.

China relies closely on its people to seek development. It has completed industrialisation that took developed countries several centuries to finish in only a few decades. It is now the world's second largest economy. China's comprehensive national strength has increased significantly, and it secured a historic success in eradicating absolute poverty.

The Chinese people have witnessed notable improvements in their lives. National politics is full of vitality with stability and order. All this enables China to create two miracles of rapid economic growth and enduring social stability.

In the fight against Covid-19, the Chinese government has always put people's lives, health and safety first, and has made major achievements in balancing Covid-19 prevention and control and economic and social development.

Democracy is the right for people of all countries, rather than the exclusive privilege of the few. It is the people of the country, not the handful of others from outside, who are the judge of whether the country is democratic or not.

There are multiple ways to realise democracy, instead of a one-size-fits-all model. It is in itself undemocratic to use a single yardstick to measure the rich and various political systems and examine the diverse political civilisations of humanity from a monotonous perspective.

Democracy is a shared value of humanity. China's whole-process people's democracy is rooted in China. Meanwhile, it also learns from other countries and absorbs the fruits of their political achievements.

China is willing to make contributions to the progress of human political civilisations with its wisdom and new achievements in its development of its whole-process people's democracy.

In this process, China is ready to, on the basis of mutual respect, strengthen exchanges and mutual learning with Indonesia and other countries to bring greater benefits to the people.

*** The writer is charge d'affaires, Chinese Embassy in Indonesia. 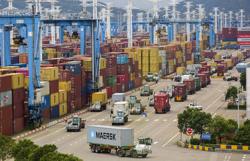