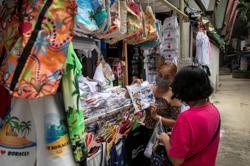 Bleak days ahead: Nunez painting a custom design on a T-shirt at a shop in Boracay Island. — Reuters

Struggling Filipino artist Alberto Nunez was looking for a change in fortunes this week, until news broke of a new Covid-19 variant, which scuppered government plans to loosen restrictions and dashed his hopes for a long-awaited boost in business.

The Philippines on Sunday backed out of a planned reopening to foreign tourists after 21 months of border restrictions, citing uncertainty over the risks posed by the new Omicron Covid-19 variant that has triggered global concern.

Nunez used to sell paintings to tourists on the island of Boracay for over 17 years, typically earning US$600 (RM2,527) a week before the pandemic.

“When I heard the news that the entry of foreign tourists was suspended, I was dismayed since our market isn’t that strong yet,” said Nunez.

The Philippines has been one of the worst-affected countries in Asia by the coronavirus, with 2.8 million cases, 48,000 deaths and an economy that contracted 9.5% last year.

Though average new daily infections have fallen sharply to 1,644 in November from 18,579 in September, the vaccination rate remains low, with just over two-thirds of the population inoculated.

Boracay, famous for its white sands and stunning green waters, had benefited from a relaxation of rules to allow more domestic travel, but Nunez fears that might be short-lived.

“I’m worried after hearing the news about the new variant and that we may go into lockdown again,” he said.

“That will really affect our livelihood again.” — Reuters 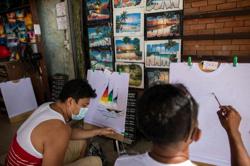