BEIJING (Bloomberg): China blasted former Japanese Prime Minister Shinzo Abe for comments it saw as supporting Taiwan independence after he warned Beijing that any military crisis involving Taipei would draw in Japan and its US ally.

China’s Assistant Minister of Foreign Affairs Hua Chunying told Japan’s ambassador to China, Hideo Tarumi, on Wednesday (Dec 1) evening that Abe had brazenly supported Taiwan independence in a speech he made earlier in the day, according to a Chinese Foreign Ministry statement.

Hua said that Abe, who stepped down as premier last year citing ill health, had grossly interfered with China’s internal affairs and violated the basic norms of international relations, according to the statement. She urged Tarumi not to underestimate China’s power to defend its sovereignty.

While delivering a speech by video to an audience in Taiwan, Abe made some of the most pointed comments by a prominent Tokyo politician on tensions in the Taiwan Strait, warning China that "a military adventure would be the path to economic suicide.”

"Any armed invasion of Taiwan would present a serious threat to Japan,” Abe said.

"A Taiwan crisis would be a Japan crisis and therefore a crisis for the Japan-US alliance,” he added, saying that Chinese President Xi Jinping should not fail to understand the situation.

Current Prime Minister Fumio Kishida has said the Taiwan Strait may be the next major diplomatic problem facing Tokyo, and Japan should seek to cooperate with Taiwan and countries that share its values of freedom, democracy and the rule of law.

China’s Communist Party sees democratically ruled Taiwan as part of its territory despite never having ruled it and seeks to block its official interactions with other countries.

Tarumi said he would report Hua’s representations to Tokyo, which cut official diplomatic ties with Taipei in 1972, the Chinese Foreign Ministry said in the statement. 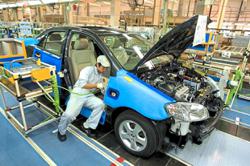