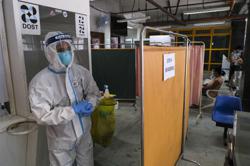 The Philippines has recorded less than 1,000 cases for seven straight days.

The Philippines is rushing to detect the potentially transmissible Omicron variant from travelers that entered the country this month, said Beverly Ho, director of the DOH's Health Promotion Bureau and Disease Prevention and Control Bureau.

World Health Organisation (WHO) Representative in the Philippines Rabindra Abeyasinghe also urged the local government to do a genome sequence of samples taken from returning overseas Filipinos or foreigners who tested positive for Covid-19.

"Right now, I think the importance is to focus on those samples of people who detected positive in points of entry for recent arrivals during the last 10 days or two weeks," Abeyasinghe said.

The variant Omicron was first detected in South Africa but has spread in Europe, Asia and North America. The Philippines has restricted inbound travel from 14 countries in Europe and the southern African region with Omicron cases.

Health Secretary Francisco Duque emphasized the importance of strengthening and preparing the country's health systems capacity for the worst-case scenario, adding that it is high time to ramp up preparations while Covid-19 cases are low.

The Delta-driven wave of infections peaked on September 11 when the DOH reported its highest daily tally, with 26,303 cases.

The Philippines, which has a population of around 110 million, has tested more than 22.5 million people since the pandemic. - Xinhua