Chinese viral immunologist Zhang Linqi considers himself lucky that he and his team developed a Covid-19 treatment and vaccine so swiftly and so effectively.

The treatment, being commercialised by Brii Bioscences, was put together in two months and the vaccine took five months. The treatment appears to work well against all existing variants of the virus.

“We can be sure all these existing variants, including Delta, have not escaped our antibodies. We are very lucky,” Zhang said. 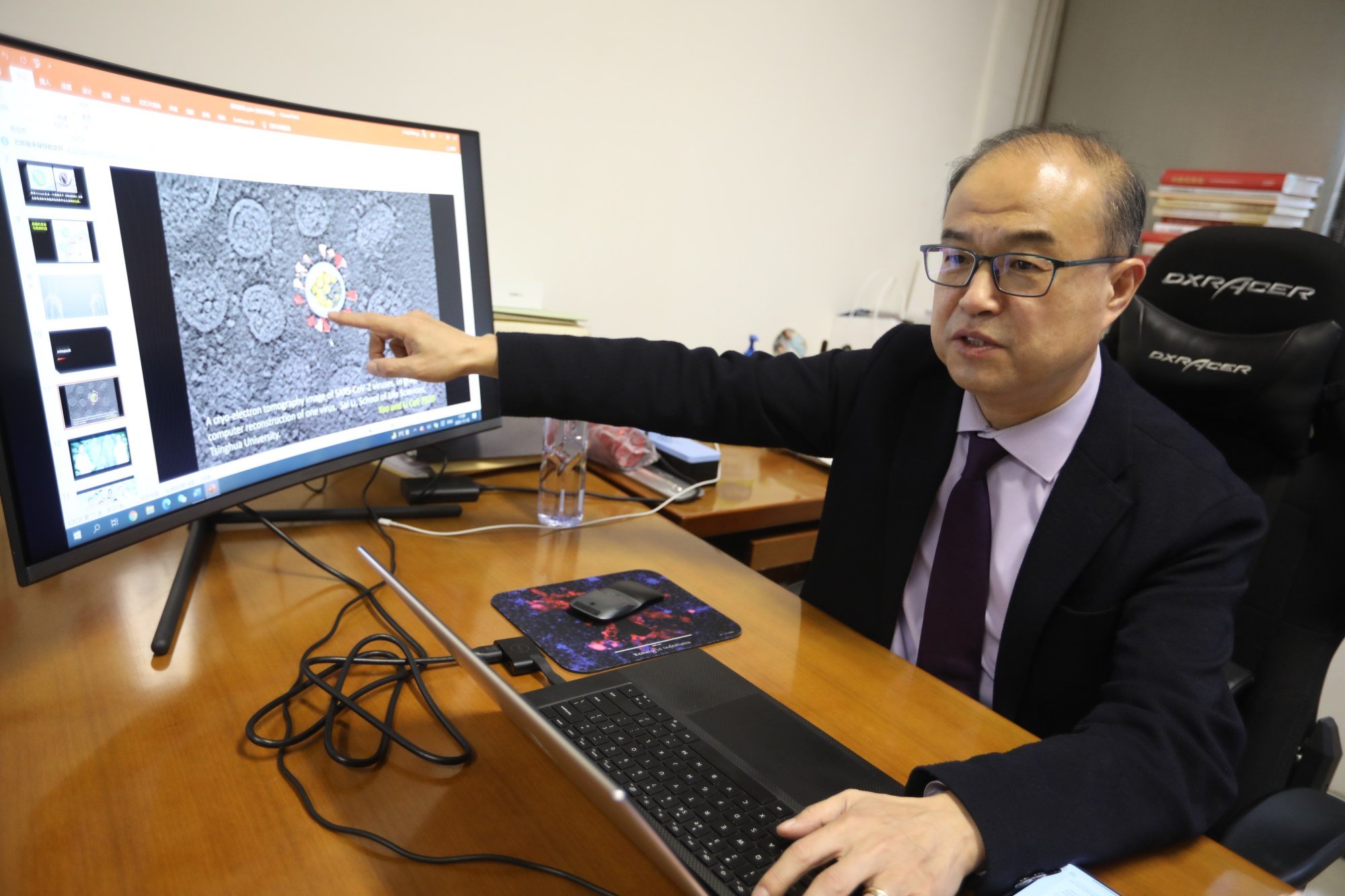 But it was less luck and more sheer determination built on a wealth of experience in responding to new pathogens that enabled Zhang, 58, and his team to quickly rise to the rescue in this pandemic.

“Developing a treatment drug and a vaccine sounds lightning fast – even to me – but actually it benefited from years of research in antibody drugs and vaccine developments in HIV research,” Zhang told the Post in an interview.

“We haven’t tackled HIV or found a cure, but we accumulated so much [experience] in antibody drug and vaccine development in the process.”

Most of Zhang’s academic and research career has been spent trying to understand viral and immune responses to HIV infection and developing antiretroviral therapy.

He started down the path with postgraduate studies at the University of Edinburgh before joining Dr David Ho’s research team at the Aaron Diamond Aids Research Centre in New York in 1993. He went on to become an associate professor at the Rockefeller University in 1997 and, 10 years later, joined Tsinghua’s medical school as professor and later vice dean of the school and the executive director of the Comprehensive Aids Research Centre at the university.

On the sidelines, he was also involved in research in new pathogens that caused alarming outbreaks. In 2003, he worked with researchers at the University of Hong Kong to develop antiviral peptides against severe acute respiratory syndrome, or Sars.

In 2012, when a Middle East respiratory syndrome (Mers) outbreak erupted in Saudi Arabia, Zhang started working with Wang Xinquan, from Tsinghua’s school of life sciences, and determined the structural mechanism of a key part of the coronavirus, helping to understand how the virus infects humans.

Soon after, the teams discovered the first human monoclonal antibody that can neutralise the coronavirus that causes Mers, publishing the results in the journal Science Translational Medicine.

Monoclonal antibodies are proteins secreted by immune cells to protect us from infection and disease progression. Once obtained in the laboratory, they can be engineered and infused back to the patients to launch an attack on the invading pathogen such as Sars-CoV-2.

When cases of a mysterious illness emerged in Wuhan in January last year, Zhang felt great urgency to act.

He was not entirely sure how contagious the virus was or how it would throw the world into chaos, but he decided to drop everything the lab was working on and focus on the new pathogen.

“I felt the outbreak would be fiercer than Sars, just looking at the rate of case growth. The moment Dr Zhong Nanshan announced the virus could be spreading from human to human, I knew this was not a simple matter,” Zhang said, referring to the respiratory diseases specialist who had visited the central Chinese city.

“We should be fully committed and do all we can even when we are not very sure about the situation.”

Zhang and Wang pooled the resources of their two laboratories and tackled the unknown of the novel coronavirus together, with some researchers analysing the structure of the virus, some working on antibodies and some developing vaccines.

It took scientists a while to work out what the virus, later known as Sars-CoV-2, looks like and how it is structured but an image came into view.

The virus has four major structural proteins. One of them, the spike protein, covers the surface of the virus and can bind to the host cell receptor angiotensin-converting enzyme 2 (ACE2) to initiate infection.

Developing a treatment drug and a vaccine sounds lightning fast – even to me – but actually it benefited from years of research in antibody drugs and vaccine developments in HIV research
Zhang Linqi, viral immunologist

In February, Zhang and Wang deciphered the structure of a part of the spike protein called the receptor-binding domain (RBD), which docks on the ACE2 and causes infection. The finding was published in the journal Nature in March that year.

In collaboration with Zhang Zheng and Liu Lei at Shenzhen No 3 People’s Hospital, Zhang and Wang from Tsinghua were the first in the world to isolate monoclonal antibodies from a batch of convalescent patients in Shenzhen. The patients were a family cluster and had travelled to Wuhan.

Antibodies that recognise RBD can potently neutralise viruses and block infections. The finding was submitted to Nature in March 2020 and published the following May.

“We know spike protein is very important in entering host cells. We found the structure of the RBD looks very similar to that of Sars-CoV-1 [the virus that causes Sars], but the interface of the RBD binding the ACE2 is very different,” Zhang said.

The difference means some antibodies can neutralise Sars-CoV-1 but not Sars-CoV-2, or vice versa. The finding sheds light on how to identify antibodies aimed at one antigen that can work against another.

“We obtained the important protein which is pure and structurally correct because of our cooperation in structural biology. Such proteins can be used as bait to fish out the right antibodies from infected patients – you get rubbish antibodies if your bait is rubbish,” Zhang said.

Researchers marked the B cells, a type of white cell that produces antibody molecules, from infected patients to screen those that bind with the RBD section of the spike protein of the coronavirus. Eventually a total of 206 antibodies were selected. The genomes were sequenced so that such molecules could be reconstructed as protein for researchers to evaluate how well they bound with the spike and how well they could neutralise the virus.

By early March, the 206 candidates were whittled down to two – both found in elderly patients.

“We still don’t know why today but what we observed in the early days was in line with the pandemic trend. It’s absolutely amazing.”

The lab-developed monoclonal antibodies – known as the BRII-196/BRII-198 combination – were created specifically to target the essential part of the coronavirus and cloned for mass production before being injected back into people to help combat infections.

“These antibodies are the best of the best, which deal catastrophic blows to viruses. Such effects work immediately, just minutes after being injected into a person,” Zhang said. 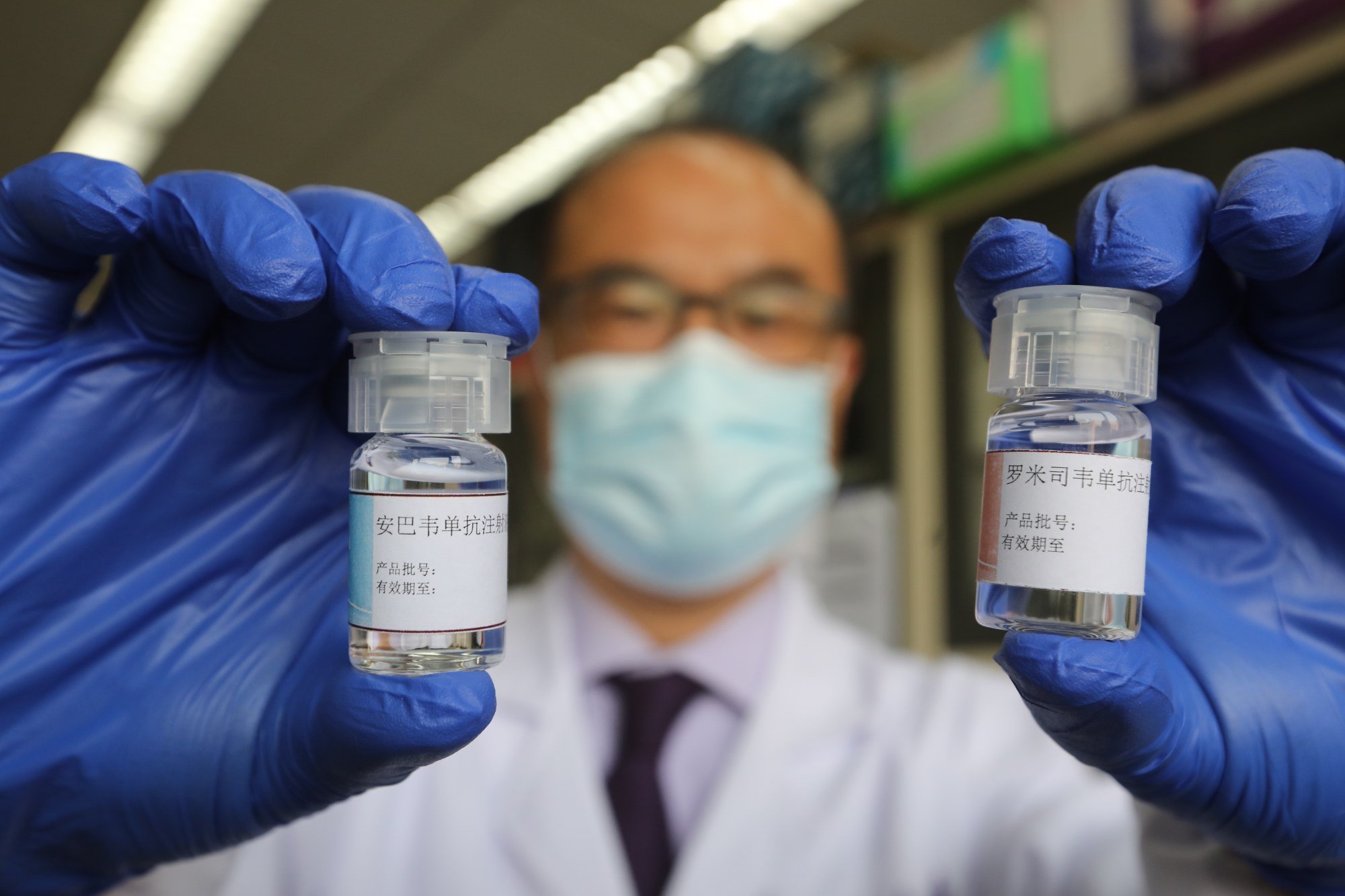 According to preliminary analysis of phase 3 trials in the United States, Brazil, Argentina and Mexico, the combination showed 78 per cent effectiveness in reducing hospitalisation and death. Zhang said the treatment had been used on a compassionate basis in more than 800 Covid-19 patients of varying severity in China, and had worked well to boost immunity and reduce disease progression.

The drug was developed based on antibodies from patients infected with the original strain of Sars-CoV-2, but they have also held up against other variants.

“Whenever a new variant emerged we would test how our antibodies work with caution and trepidation because the drug would go down the drain if one variant escaped from the antibodies, but so far the drug showed broad-spectrum neutralising ability,” Zhang said.

Antibody therapies have been used before for viral infections and the US Food and Drug Administration has authorised three anti-Sars-CoV-2 monoclonal antibodies for patients at various stages. The antiviral medication remdesivir also has US approval.

Two pills, Paxlovid by Pfizer and molnupiravir by Merck, are being considered by the FDA for emergency use and could be game changers because, unlike monoclonal antibodies which must be transfused, they can be easily taken at home.

Zhang said drugs like the pills had the benefits of convenience and lower production costs but monoclonal antibodies had their own strengths.

“These antibodies come from humans so the adverse events will be smaller. The antiviral activity is strong and, after our genetic modification, the duration of effective protection can be nine to 12 months after one intravenous infusion of two small bottles of antibodies,” Zhang said.

The therapy, if approved, could be used to treat infected patients and also among high-risk groups for prevention and post-exposure use, such as medical and health care providers, border staff and people with compromised immune systems.

Meanwhile, the team’s Covid-19 vaccine, based on an adenovirus found in chimpanzees and developed in partnership with vaccine manufacturer Walvax Biotechnology, has completed phase 2 trials.

These antibodies are the best of the best, which deal catastrophic blows to viruses
Zhang Linqi, viral immunologist

Zhang said the vaccine was very well tolerated and its ability to provoke an immune response was being reviewed.

Developing the Covid-19 drugs and vaccine has taken a lot of energy and time from his work on HIV, but Zhang said the experience broadened the horizons for HIV research. It also gave the positive feedback scientists needed from time to time when there was no hope of imminent breakthroughs in their regular investigations.

“I feel HIV researchers must have a strong heart to continue to explore even after countless setbacks. The area has attracted the finest minds in the world yet there has been no major breakthrough for years. We would throw in the towel if we hadn’t had that strong heart,” Zhang said.

“But with religious-like persistence and determination we are still trying and continue to persuade ourselves that an HIV cure and vaccine are possible. That’s what scientists do.”