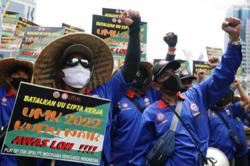 BANGKOK (The Nation/Asia News Network): Faced with unceasing trouble even after two months of flooding, angry Suphan Buri shrimp farmers slapped government agencies with as many as 210 lawsuits on Thursday (Nov 25) for their water "mismanagement". They are demanding compensation to the tune of THB142 million for damages incurred.

The shrimp farmers in Bang Pla Ma and Song Phi Nong districts, Suphan Buri province gathered at the Administrative Court to sue the Royal Irrigation Department and the Ministry of Agriculture and Cooperatives for the mismanagement of water, which has caused high flooding since the end of September.

The giant freshwater prawn farmers in the province are said to suffer "100 per cent" from the flood damage, while more than 2,000 residents are intending to file additional lawsuits.

Manit Puttachanya, a shrimp farmer in Bang Pla Ma district, told the reporters on Thursday that the government intended to divert the water into the areas to avoid flooding in industrial and community sections.

“The farmers in the districts have been suffered from the fall of shrimp prices for more than three years since the beginning of the pandemic. We thought the price would become higher during the upcoming New Year festival as the Covid-19 situation eases, but now our farms are covered with floods,” Manit said.

Manit said that he did not want to file the lawsuit and his intention was to call on the related government agencies to fully pay the compensation for the actual damage amount. He said the government compensation of 11,780 baht per rai for not more than five rai for each farmer did not help, as one shrimp farmer would own at least 10-20 rai.

“The average investment per pond is 50,000 baht and the farmers are currently facing debt problems. There are only expenses to pay for the loan of investing in the shrimp farm. We know that the government does not have the ability to help much. But we do hope that this litigation will at least alleviate the problem,” Manit added.