ASEAN leaders will head to their annual summit with some measure of credibility intact following the exclusion of Myanmar’s junta chief Min Aung Hlaing from the bloc’s supreme policymaking body, but they need to keep the momentum going in implementing previously agreed principles, experts say.

Regional leaders will meet virtually this week without the coup leader in attendance following the announcement by Brunei Darussalam, Asean chair this year and host of the summit, that a non-political representative had been invited instead.

The unprecedented decision was made by Asean foreign ministers on Oct 15 because of a lack of serious commitment from Myanmar’s junta in implementing the five-point consensus, a set of principles agreed by Asean leaders and Min Aung Hlaing himself in an in-person, emergency meeting in April.

He confirmed that the bloc had instead invited a non-political representative – director general of the foreign affairs ministry Chan Aye.

“But we aren’t sure whether to attend or not... attending it could affect our country’s sovereignty and image,” the spokesman said.

The five-point consensus demands, among others, that the military junta stop all violence, de-escalate tensions and open dialogue as well as allow humanitarian aid and a visit of a special envoy to meet with all parties concerned.

Most recently, the junta pledged to cooperate “as much as possible” in implementing the five-point consensus with Asean, the regime said in an announcement in state media on Sunday, as reported by Reuters.

Jakarta-based Centre for Strategic and International Studies senior researcher Rizal Sukma said not inviting Min Aung Hlaing only “partly restored” Asean’s reputation, while the key test was whether it could implement the five-point consensus.“That will require sustained pressure on the junta. Asean should follow up that decision with a few other steps. It is now a no-turning-back phase for Asean,” he said on Sunday.

He said Asean should coordinate and work with China, India and other front line states – such as Thailand and Bangladesh – to provide humanitarian assistance to people at the borders.

He also said Asean should start engaging other stakeholders openly and publicly, such as the National Unity Government – a Myanmar opposition government composed of elected lawmakers and members of parliament ousted in the February coup – as well as the civil disobedience movement and ethnic armed organisations in Myanmar.

Myanmar’s military government has already decried Asean’s decision to exclude the senior general, claiming there was “no consensus” on the matter and insisting that it was a violation of the Asean Charter, including the entitlement of heads of state to attend the meeting.

Min Aung Hlaing’s legitimacy as the leader of Myanmar, however, was questioned again following the latest testimony from ousted president Win Myint, who told a court that he was forced to resign as the coup unfolded in February.

The testimony challenged the State Administration Council (SAC), a governing body propped up by Myanmar’s military, citing the country’s 2008 Constitution.

“The latest response from the SAC clearly demonstrates that it has no understanding of the problem of its own making and no desire to work and respect Asean,” Rizal said.

“So, Asean should just declare that there should be no SAC representatives attending any Asean meetings from now on.”

Foreign policy scholar Dewi Fortuna Anwar said while the exclusion of Min Aung Hlaing was a clear firm step, Asean leaders had to agree on what other action to take.

“Asean has never imposed any sanctions on its members, but it is time to talk tough with Myanmar.

“And Myanmar has to think about its place in South-East Asia and Asean, whether it wants to be part of the family and if so, it has to stop being a liability,” she added.

One option was to give Myanmar a deadline for complying with Asean’s demands, she said, and in that time Asean could work with the global community in handling the crisis, including through the United Nations Security Council. — The Jakarta Post/ANN/AFP 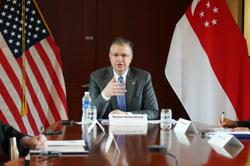