Xi Jinping is expected to use a major Communist Party meeting in November to bolster his case for a third term in office. - Reuters

BEIJING (Bloomberg): Chinese President Xi Jinping took a veiled swipe at US leadership in a speech marking Beijing’s 50th anniversary as a member of the United Nations, comments that come as Washington moves toward helping Taiwan play a bigger role in international forums.

"China has always pursued an independent foreign policy of peace, upheld justice and resolutely opposed hegemonism and power politics,” Xi said, in comments that stopped short of naming the US.

The Chinese leader vowed that his nation would "stick to the road of peaceful development,” adding that nations should work together to address issues such as terrorism, climate change, cybersecurity and biosecurity.

Xi also spoke with UN Secretary-General Antonio Guterres via video link, according to the Global Times. Guterres offered his congratulations on the anniversary and the two discussed expanding cooperation on issues such as dealing with climate change, the Communist Party newspaper reported.

Tensions between China and the US have lingered since a trade war erupted during the Trump administration. Beijing has stepped up military pressure on Taiwan this year, and President Joe Biden last week said the US was committed to defending the democratic government in Taipei from a Chinese attack, comments Beijing denounced.

Xi is expected to use a major meeting of the ruling party in November to bolster his case for a third term in office. A key point selling point for Xi is that he is standing up to the US on issues from efforts to determine the origins of the coronavirus to Taiwan, which China views as a breakaway province that must be brought under Beijing’s control.

That friction is likely to escalate after high-level diplomats from the US State Department and the Taiwanese Ministry of Foreign Affairs met Friday via video to discuss Taipei’s participation at the UN and other international forums.

"The discussion focused on supporting Taiwan’s ability to participate meaningfully at the UN and contribute its valuable expertise to address global challenges, including global public health, the environment and climate change, development assistance, technical standards and economic cooperation,” the State Department said in a statement.

State Department official Rick Waters said last week that China has been misusing UN Resolution 2758 -- which in 1971 recognised Beijing as the legitimate representative to the UN instead of Taipei -- to stop Taiwan from playing a big role in the organisation, according to the semi-official Central News Agency in Taiwan.

China’s embassy in the US hit back at the remarks, saying in a statement that they "disregard facts” and were "highly misleading.”

"This is a serious political provocation to China and a malign distortion of international law and universally recognised norms governing international relations,” the statement said, adding that China lodged a solemn representation with US diplomats.

Five decades ago when Mao Zedong led China, the UN voted to give Beijing a seat in its General Assembly and expel Taipei, saying that the former is the "only legitimate” representative of China.

The People’s Republic of China, now led by Xi, holds a permanent position on the Security Council and plays a large role in UN bodies that handle issues such as climate change and food security, while working to exclude Taiwan.

Biden answered "yes” when asked during a CNN town hall Thursday whether he could pledge to protect Taiwan.

A White House spokesperson later said Biden didn’t announce a change in US policy toward Taiwan. The US would continue to uphold its commitment under the Taiwan Relations Act, support Taiwan’s self-defense and oppose unilateral changes in the status quo, the spokesperson said.

Chinese Foreign Ministry spokesman Wang Wenbin offered only a mild rebuke of Biden’s comments, urging the US to "speak prudently” on Taiwan and abide by its agreements.

Xi and Biden are preparing to hold their first summit via video since the US presidential election. Washington is aiming to hold the meeting later next month, Reuters has reported, citing people familiar with the matter. 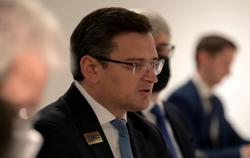