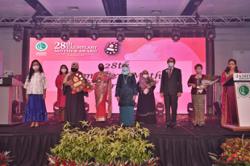 The Covid-19 pandemic and the many restrictions brought about by it have had a more drastic impact on women compared with men, as women carry a greater share of caregiving responsibilities at home, said President Halimah Yacob.

Speaking at the 28th Exemplary Mother Award presentation ceremony organised by Jamiyah Singapore, Halimah noted that the pandemic has also had an increased mental toll on women as compared with men.

According to a study in medical journal The Lancet, Covid-19 has led to a sharp increase in anxiety and depression worldwide, and women have fared worse than men, said Halimah.

She said the greater prevalence of mental health issues among women is “anticipated” because women are more likely to be affected by the social and economic consequences of the pandemic.

More household responsibilities on women because of home-based learning for children and generally lower salaries than their male counterparts were among reasons listed by Halimah.

“They are also more likely to be victims of domestic violence, the prevalence of which increased during periods of lockdowns and stay-home orders,” she added.

Having more programmes to help women is insufficient, she said, calling for “a more fundamental shift in mindsets, attitudes and social norms where there is respect and understanding of women’s place as equal partners in society and not as subservient, supporting members of the cast”.

The pandemic has also made the burden of caregiving responsibilities even more acute over the past 20 months, said Halimah.

She said: “As people are confined to their homes, caregivers have seen their stress levels climb to an all-time high. Many caregivers are ‘on call’ almost all day.”

A survey shows there are about 210,000 caregivers in Singapore, said Halimah, adding that most caregivers are women.

She stressed the need for existing support for caregivers to be reviewed to ensure its relevance and adequacy in meeting their needs.

Said Halimah: “Our caregivers’ greatest concerns are twofold; who will take care of their loved ones who need caregiving when they grow old and frail, and how will they survive retirement without enough savings or income of their own.”

At the ceremony on Saturday, Sapiah Haron, 53, was presented with the Exemplary Mother Award, which was launched in 1993.

The mother single-handedly raised her eldest daughter, who was born with a cleft palate, between 1995 and 2004 while her Bangladeshi husband was denied entry into Singapore.

Far’ain Jaffar, 33, who fulfilled her dream of becoming a foster mother with an infant and a toddler in 2017, received the Exemplary Young Mother Award. 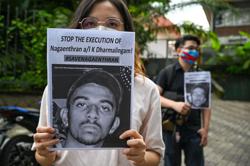