Xi visiting a drilling platform of the Shengli Oilfield. - Xinhua

Xi made the remarks during a visit on Thursday (Oct 21) to the Shengli oilfield in the eastern province of Shandong, according to the People’s Daily newspaper. The oilfield is the largest operated by China Petroleum & Chemical Corp, or Sinopec.

"As a major manufacturing power, China has to secure its energy supply in its own hands.”

Sinopec has also positioned itself as a national leader in developing hydrogen as a clean energy source. The nation’s three biggest oil companies report third quarter earnings next week, where the usual attention to their spending plans will take on particular significance in light of the energy crisis that has wracked the world’s No. 2 economy.

Chinese leaders have been seeking to minimize disruptions as the energy crunch roils the world’s most important manufacturing hubs. Last week, Premier Li Keqiang vowed to ensure power supplies to factories, after saying a path to a greener economy needs to be underpinned by a stable supply of energy. 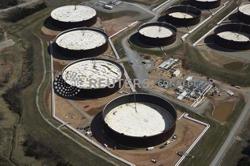