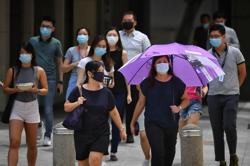 For Singaporeans, school fees and standard miscellaneous fees are unchanged, the Ministry of Education said on Oct 21, 2021. - ST FILE

International students will pay between $25 and $150 more, depending on their educational level, said MOE.

The changes will kick on from January in both years.

MOE said the fee hike is part of a regular review of school fees, and the information is to help parents with their planning.

School fees for non-Singaporean students have climbed steadily over the past few years. In 2017, MOE said fees would rise for PRs and foreigners in 2018, 2019 and last year, from between $25 to $60 a month for PRs and by $25 to $150 a month for international students.

MOE said it would not be increasing school fees for Singapore citizens, permanent residents and students from Asean this year.

However, it said there would be an increase of about 3 per cent in fees for non-Asean foreign students in government and government-aided schools.