MANILA (Philippine Daily Inquirer/Asia News Network): What is the state of the Philippines as it prepares for general elections in May 2022? Ain't pretty, and voters should wonder, unless it takes them for fools, why Malacañang has taken continuity for its theme and, through its candidates, is pushing more of the same for the next six years.

For one thing, the Philippines' indebtedness has ballooned to US$3.07 billion (S$4.13 billion) per the World Bank. It was the global lender's top borrower for the fiscal year July 1, 2020-June 30, 2021, topping even India, which means that even the children, malnourished and stunted ones included, will be in hock in the foreseeable future, the demands of debt service gobbling what otherwise should be devoted to their welfare.

President Duterte's administration took out these loans for health-care and vaccine financing, as well as for conditional cash transfers, customs modernisation, disaster resilience and recovery, peace-building in the Bangsamoro Autonomous Region in Muslim Mindanao, and certain agriculture projects-all while suspicious multibillion-peso transfers were occurring from the Department of Health to the Procurement Service of the Department of Budget and Management, and the undercapitalised Pharmally Pharmaceutical Corp was cornering medical-supply contracts at questionable prices.

For another thing, most Filipinos have been effectively muzzled; they are fearful of speaking openly against the administration, and deem it unsafe for media people to say, whether in print or on air, anything critical of the same. They appear to have been impacted by Malacañang's moves on such news outlets as Rappler and ABS-CBN.

"Most people, from north to south, say it is dangerous for media people to be critical of the administration," Inquirer columnist Mahar Mangahas wrote last week, citing results of surveys undertaken by Social Weather Stations.

"Most people, from all walks of life, say the same. In the past two years, the people haven't been seeing press freedom."

For yet another thing, the Philippines' standing in the global Rule of Law Index has continued its precipitous plunge, slipping to its worst - No. 102 among 139 countries, falling three more notches from its ranking last year-since 2010, when the country was first included in the evaluative survey conducted by the World Justice Project.

Justice Secretary Menardo Guevarra has maintained that "our law enforcement, prosecutorial, and judicial institutions, while not perfect like all other human institutions, are nevertheless functioning as they should."

But surely certain bereaved families, still awaiting the results of the Department of Justice's review of extrajudicial killings under Duterte's "war on drugs," will not readily agree.

Surely the family of Ritchie Nepomuceno of Cebu City-who was reported to have accused in March 11 cops of extortion and their team leader of twice raping her, and who was shot dead in April as she stood by a road-will reserve judgement on Guevarra's declaration.

And, with huge caches of "shabu" still regularly turning up in various places despite the thousands upon thousands of EJKs, surely voters cannot reasonably be expected to uphold the continuity represented by the presidential run of Sen.

Bato de la Rosa, the former top enforcer of the bloody anti-drug campaign now the subject of investigation by the International Criminal Court.

Duterte has been pitching for administration candidates, assuring them the necessary aid and comfort, and reiterating his early promise of sacks of money for their campaign. (Malacañang has yet to pronounce it a joke, or not.) Grizzled pols "on-trend" with substitution and place-warmers are cynically mouthing things about abjuring "personality politics."

Meanwhile, ordinary folk stew in monster commuter queues. Those of a certain age will recall the economic hardships-all documented-during the martial rule of Ferdinand Marcos, whose son and namesake, now past 60 and still denying knowledge of his father's crimes, is angling to resume residence at the Palace. The unrelenting increase in oil prices continues to augment the difficulties endured by Filipinos still gripped by the pandemic. 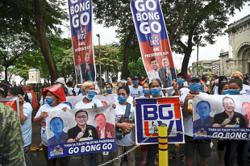 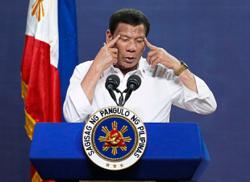