A man celebrates with relatives after being released from Insein Prison in Yangon on Tuesday, October 19, 2021, as authorities released thousands of people jailed for protesting against a February coup that ousted the civilian government. - AFP

YANGON, Oct 19 (AFP): Newly released anti-coup protesters in Myanmar were reunited with their families outside a Yangon prison on Tuesday in tearful scenes on the second day of a junta amnesty as international pressure mounts on the regime.

The South-East Asian country has been in chaos since a coup in February, with more than 1,100 civilians killed in a bloody crackdown on dissent and more than 8,000 arrested, according to a local monitoring group.

On Monday (Oct 18), the military said it would free more than 5,000 people to mark the three-day Buddhist Thadingyut festival, sending anxious families rushing to prisons, joyful at the prospect of reunions after months apart.

"I've missed you so much," a mother wept over her newly released son, as he cradled his young child. "I'm so proud of you."

She was among hundreds who had gathered again Tuesday morning outside the colonial-era Insein prison in Yangon, some carrying flowers and placards bearing the names of their relatives.

Buses pulled out, with former detainees inside giving the thumbs up gesture through the windows to the cheering crowd, some of whom flashed the three-fingered salute -- a sign adopted by the democracy movement.

Than Toe Aung Was -- imprisoned for around six months -- was greeted by his jubilant sister outside.

"I would not say why I was arrested," he said, urging people to "move forward for the future".

"I'm happy for my release. But I will have to try for those who are not released," he added, flashing the crowd a three-fingered salute.

Meanwhile, Nwet Nwet San said he was hoping his son, a soldier who had run away from the army, would be freed.

"He's been in prison for eight months," he told AFP, adding that although he had heard it was mostly protesters being released, others would be set free too. 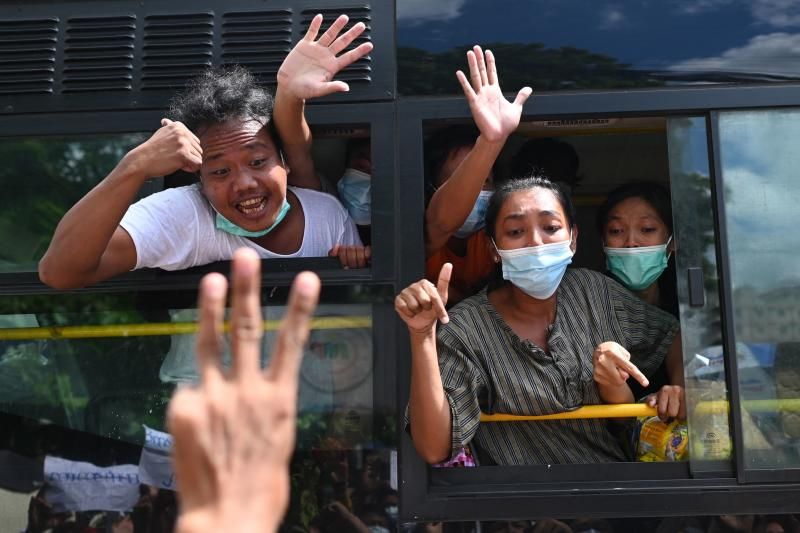 Detainees released from Insein Prison celebrate in Yangon on October 19, 2021, as authorities released thousands of people jailed for protesting against a February coup that ousted the civilian government. - AFP

The amnesty was "a tactical response to a pretty hostile domestic and international environment," Richard Horsey of the International Crisis Group told AFP.

"These kinds of cynical moves may have worked 20 years ago... but it will do nothing to improve the standing of this regime."

Myanmar authorities released more than 2,000 anti-coup protesters from prisons across the country in June, including journalists critical of the military government.

Those still in custody include the American journalist Danny Fenster, who has been held since being arrested on May 24.

The amnesty over Thadingyut comes with the military under increasing pressure to engage with its opponents, nearly nine months after seizing power.

On Friday, the Association of South-East Asian Nations (Asean) decided to exclude junta leader Min Aung Hlaing from an upcoming summit of the 10-country bloc over doubts about his commitment to defusing the bloody crisis.

Often criticised as toothless, Asean took a stand after the government rebuffed requests for a special envoy to meet "all stakeholders" in Myanmar -- a phrase seen to include ousted civilian leader Aung San Suu Kyi.

The coup snuffed out the country's short-lived experiment with democracy and the 76-year-old Suu Kyi now faces a raft of charges in a junta court that could see her jailed for decades.

Last week, her chief lawyer said he had been banned by the military from speaking to journalists, diplomats or international organisations.

The other lawyers on her legal team also face a similar ban -- effectively muzzling the key sources of information on court proceedings, from which journalists are barred.

Nobel laureate Suu Kyi, who has spent much of her life resisting Myanmar's generals, is scheduled to testify in court for the first time later this month. - AFP