YANGON, Sept 24 (Xinhua):The number of Covid-19 infections has risen to 453,407 in Myanmar after 1,744 new confirmed cases were reported in the past 24 hours, according to a release from the Ministry of Health on Thursday night (Sept 23).

The release said that 77 more deaths from the coronavirus epidemic were recorded in the country, bringing the death toll to 17,343.

The number of recoveries has risen to 406,175 after 1,696 more recovered Covid-19 patients were discharged from hospitals on Thursday.

In another development, law-enforcement authorities from China, Laos, Myanmar and Thailand has joined forces for the 109th Mekong River joint patrol.

During the patrol, the joint law-enforcement team will crack down on cross-border crimes, including illegal immigration, drug smuggling, and criminal activity related to telecommunication and internet in the Mekong River basin, said the bureau.

The Mekong, known as the Lancang in China, is a vital waterway for cross-border shipping.

China, Laos, Myanmar and Thailand have been carrying out joint patrols in the river since December 2011. - Xinhua 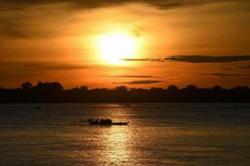