China will launch its next manned space mission two days after National Day, with a woman astronaut among the crew to go into orbit to help build its new space station, sources said.

Two sources familiar with China’s manned space programme said the Shenzhou 13 spacecraft would lift off from the Jiuquan Satellite Launch Centre in northwest China on October 3.

The launch will be less than a month after the Tiangong space station’s first crew returned to Earth.

“The crew, spaceship and rocket are all in good condition. We are finalising the last few rounds of checks,” a source at the centre said.

He said the centre was also making some minor adjustments to the mission based on feedback from the Shenzhou 12 crew – Nie Haisheng, Liu Boming and Tang Hongbo – who were undergoing medical checks and quarantine.

Huang Weifen, the astronaut system’s chief designer at the China Manned Space Agency (CMSA), said on Friday that the returning astronauts were in good physical and mental health after three months in orbit but they would have to spend three to four weeks readapting to the Earth’s gravity, rebuilding their muscles and readjusting their cardiovascular system.

The Shenzhou 13 crew is expected to spend six months at the space station and efforts were made to ensure the members would be comfortable during their stay, including adding skincare products to the supplies, according to a second Jiuquan source.

“We want all colleagues to have a comfortable experience on the space station ... We spoke to them and conducted tests to decide on what toner, essence and cream to bring,” the source said.

“We want to make sure they will feel comfortable and in good condition during their time at the space station as they will have a busy six months there.”

Only two of the 11 astronauts China has sent into space since 2003 have been women – Liu Yang and Wang Yaping. Wang was shortlisted as a member of the backup crew for Shenzhou 12 and is the front runner for a spot this time.

She was also part of the Shenzhou 10 crew, which tested the Tiangong 1 experimental lab in June 2013. More than 300 primary and secondary school students in Beijing also attended her space class, live-streamed from the module at the time.

The Shenzhou 13 mission will also be the first to perform a vertical docking with the space station’s core module. The Tiangong’s front and rear ports are already occupied by the Tianzhou 2 and Tianzhou 3 cargo ships.

Zhou Yaqiang, chief designer of CMSA’s general technology bureau, told state broadcaster CCTV on Monday that the crew would have three main objectives during their time in orbit.

“First will be to verify the sustainability of the technology for long stays by the astronauts,” Zhou said.

“Second, they will do spacewalks to further verify the technologies related to astronauts, their spacesuits, robotic arms and the space station.

“Third, they will carry out relevant science experiments in orbit, and amass further experience for the construction and operation of our space station.”

Shenzhou 13 will be the last mission this year to build the space station. The Tianzhou 3 docked with the Tiangong’s core module on Monday and when the Shenzhou 13 connects to the space station, the whole structure will be T-shaped and have a mass of nearly 50 tonnes.

Zhou from CMSA confirmed on CCTV that six more missions were planned for next as part of the ongoing construction phase.

The plan includes sending two more space lab modules, the Wentian and Mentian, so the astronauts can carry out more experiments in areas such as space medicine and biotechnology.

“Once this is completed, the space station will enter the operational phase,” he said.

In all, the Tiangong will have a mass of about 100 tonnes, about a quarter of the size of the International Space Station, which was built by a coalition of 16 countries.

The Tiangong is likely to be the only space station operating in near-Earth orbit by the end of the decade, because the 15-year-old ISS is ageing, especially its Russian segment, the Zvezda service module. 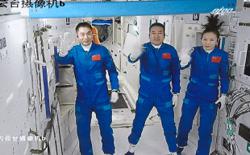