China’s Covid-19 outbreak in the southern coastal province of Fujian is continuing its rise, with 51 new infections recorded on Tuesday and its highest ranking official predicting “a big, tough and difficult battle” ahead.

Putian, where the outbreak of the more transmissible Delta variant was first detected, recorded another 33 cases on Tuesday. Residents of the city, a 6-hour train journey from Shanghai, have been ordered not to leave and citywide testing for the virus is under way.

The total number of cases across the province since the outbreak began a week ago is now 165.

Yin Li, Fujian party secretary and a former deputy health minister, told a provincial level meeting on Tuesday that the epidemic situation was “serious and complex, and the task of prevention and control is urgent and onerous”.

Although more than 30 outbreaks have occurred in China since the Covid-19 pandemic was initially contained in April last year, the Putian cluster is the first to include significant numbers of young children.

According to the city authorities, 28 primary school pupils and eight kindergarten-aged children had been infected as of Monday, presenting “a very difficult problem”.

Education ministry official Wang Dengfeng, who is in charge of managing Covid-19 within the school system, told state broadcaster CCTV that schools in border cities or with frequent overseas exchanges were encouraged to regularly test some or all of their student cohort for the virus. “This is very important for early detection and early treatment,” he said.

Zhu Xiaqing, a fever clinic nurse at Putian University Affiliated Hospital, said the young patients were well behaved despite their obvious distress at being treated in isolation wards without their parents.

“All the children I received today were about 5 or 6 years old and I couldn’t hold back my tears when they got off the ambulance,” she told Fujian Health News.

“One child cried for two hours at home before leaving for the hospital ... my own eyes welled when I saw these children in protection suits get out of the ambulance.”

“The protection suits are hot for adults, not to mention children, let alone those with a fever, yet they wear them all the time and don’t take off their masks,” Zhu said. “The youngest child was only four years old, yet did not make a fuss during the CAT scan.”

Coronavirus pandemic at ‘critical phase’ in Asia-Pacific, warns WHO

The children, who arrived at the hospital with bags of snacks, are staying in wards decorated with cartoon characters and have been given books.

Wu Lanfang, deputy head of Xianyou, the county where all the young cases have been reported, said on Wednesday the authorities had arranged for parents to stay with their children in the isolation ward or in quarantine and teachers were organising regular online “clocking in to comfort children”.

Vaccination levels in Xianyou are high, with 92 per cent having received at least one dose. Teenagers aged 12-18 years have all been vaccinated.

In Xiamen, a popular tourist attraction about a 3-hour flight from Beijing with a population of 5.6 million, there were 12 new cases and one asymptomatic infection on Tuesday. Most of the cases were linked to the Chenming Craft Company, where a cluster developed after an employee visited Putian and then returned to work for six days.

A Chenming employee surnamed Wang told Chutian Metropolis Daily that the affected workers were mostly from one workshop in the factory, which has about 300 employees in total. He said the outbreak was a surprise because all the workers were masked and at least one metre apart.

“It’s probably because the virus is very contagious,” he said, from a hotel where he is being isolated.

The virus has also spread to the city of Quanzhou, which reported five new cases on Tuesday.

The Fujian outbreak occurred just days before two major holidays in China, Tuesday’s Mid-Autumn Festival and the week-long National Day holidays two weeks later, when hundreds of millions of people are expected to travel across the country.

Chinese travellers are going on holiday again, but not too far from home

A team of experts from the National Health Commission said last week that 30,000 people from Putian had already left the city before the outbreak emerged but believed it could be contained before the start of the National Day break.

The Fujian government has said government employees should not travel to high risk areas but stay within the province during the holidays.

Zhangzhou city, which has frequent people exchanges with Putian, Xiamen and Quanzhou, has started coronavirus testing in four districts and closed schools in two districts for a week. 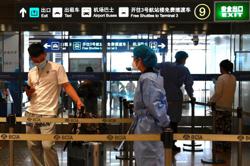