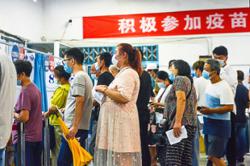 Safety first: A staff member spraying disinfectant at a temporary laboratory used for Covid-19 testing at an exhibition centre in Nanjing. — AFP

NANJING: A mega-city with a population of more than 9.3 million in eastern China, Nanjing has launched the third round of all-inclusive nucleic acid testing to contain the latest Covid-19 resurgence that first emerged at its airport.On July 20, nine cleaners at the Nanjing Lukou International Airport tested positive for the virus during a routine inspection.

By July 29, Nanjing, the capital city of Jiangsu province, had reported a total of 184 locally transmitted confirmed cases and one local asymptomatic case.

So far, the viral genome sequencing of 52 cases in the recent resurgence showed that the new cases were highly homologous, suggesting the same transmission chain, and all strains were found to be the highly infectious Delta variant, said Ding Jie, deputy director of the Nanjing municipal center for disease control and prevention, on Friday.

The Delta variant is the fastest and fittest coronavirus strain that “picks off” the most vulnerable people, the World Health Organisation (WHO) said in June.

The special location of the infections and the highly contagious nature of the Delta variant contributed to the recent surge in infections, said Ding.

In addition to a total of 193 locally transmitted confirmed cases and five local asymptomatic cases in Jiangsu by Thursday, new infections were also reported among flight passengers who have visited the airport and their contacts in other parts of China, including the provinces of Guangdong, Sichuan and Liaoning.

According to the epidemiological investigation, the couple in Beijing had once travelled to Zhangjiajie, a tourist city known for its pillar-like mountains in central China’s Hunan province.

From July 26, at least 15 locally transmitted confirmed Covid-19 cases had travel history to Zhangjiajie, and some of them were reportedly in contact with cases who had been to the Nanjing airport.

Zhang Wenhong, a renowned medical expert in China, said the confirmed cases in other parts of China were basically found among high-risk groups, which are still linked to the chain of transmission related to the Nanjing airport.

No community cases were found out of the transmission chain of Nanjing airport, which indicates that the epidemic situation is still under control.

To curb the Covid-19 resurgence, Nanjing has launched three rounds of all-inclusive nucleic acid testings and urged residents not to leave the city unless necessary.

Huang Xiaofeng, a resident in Xuanwu district, Nanjing, went through a nucleic acid test within 15 minutes at a nearby testing site.

“I did all three nucleic acid tests here. It was done more and more efficiently,” said Huang.

Currently, the district has 88 nucleic acid testing sites, including 30 mobile ones, providing testing services for citizens nearby.

In order to enhance its nucleic acid testing capabilities, Nanjing has also built six advanced air-inflated testing labs, which can screen up to 1.8 million people every day by using the mixed testing approach.

The summertime is normally a travel season for Chinese people, adding the risk of epidemic spread.

“It is important to strengthen prevention measures at popular scenic spots, major airports and railway stations,” said Wu Anhua, a medical expert with the Xiangya Hospital in Changsha, capital of Hunan province.

Zhangjiajie closed all its tourist sites starting Friday morning after the latest infections.

As of Thursday evening, more than 226,000 people had samples taken from them in the city, and more than 120,200 tests had been completed, with one positive result. The infected woman is reported to work for a local travel agency.

The Delta variant, which might become the dominant strain over the coming months, has spread to 132 countries and regions, WHO said. — Xinhua 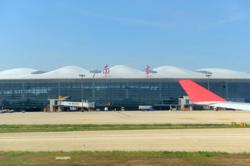