Face of the revolution: An image of Suu Kyi is projected on a screen during a night-time rally in Yangon in this file photo. — AFP

IMPRISONED by the military, detained Myanmar leader Aung San Suu Kyi is isolated from the young protesters now forging their own struggle for democracy outside of her shadow.

Tomorrow marks six months since her National League for Democracy (NLD) government was ousted, setting off a mass uprising and violent military crackdown that has killed nearly 1,000 people.

Suu Kyi remains a revered figure locally for her courageous opposition to a previous junta, despite her international reputation suffering after she governed in a power-sharing deal with the generals.

But for many still fighting, the revolution must go further than the movement the Nobel laureate led decades ago, and permanently root out military dominance of the country’s politics and economy.

“We’re on strike not because of the NLD, but because we don’t want our next generation to live under the military like we did,” a 33-year-old doctor – fired after joining protests – said.

Flash mob rallies organised on social media and the adoption of the three-finger pro-democracy salute show that Myanmar’s younger activists have more in common with contemporaries in Hong Kong and Thailand than the elderly veterans of Myanmar’s political struggles.Suu Kyi still has the respect and love of many in Myanmar, said Manny Maung, a researcher at Human Rights Watch, “but more as a historical figure”.

The democracy campaign “no longer wants an icon”, she added.

“They have a much more decentralised approach to power and want to see the emergence of diverse political forces.”

Some have also shunned non-violence – a core principle of Suu Kyi’s.

Hundreds are believed to have trekked into jungle areas to receive combat training from veteran rebel groups, with hopes of returning to fight the military.

Urban guerillas have also clashed with junta forces, with the military reporting that two officers were killed in a gun battle with a local group in the central city of Mandalay last month.

Suu Kyi has largely disappeared from view, seen only in grainy state media photos from the bare courtroom hosting her trial and relying on her lawyers to relay messages to the outside world.

It is a far cry from her long spells under house arrest during the last period of military rule, where she sometimes appeared before thousands gathered on the other side of her garden fence in Yangon.

Off the streets, a shadow “National Unity Government” of ousted lawmakers from Suu Kyi’s party is working to garner international support and direct opposition to the junta without her.

But within its ranks are “strong divisions between the old guard loyal to Suu Kyi and the progressive wing eager for renewal,” Maung said.The group recently invited the country’s Rohingya community to join the fight against the junta, promising an end to discriminatory policies against the stateless minority.The use of the word “Rohingya” is new – Suu Kyi’s government had refused to even use the term.

Her refusal to condemn a brutal 2017 crackdown that sent 750,000 Rohingya fleeing to Bangladesh sorely damaged her reputation abroad, especially after she travelled to The Hague to defend the generals against genocide charges.

The coup has shown the world that Myanmar’s battle for democracy is more complex than an earlier era when freeing Suu Kyi from house arrest was considered “the solution”, said Richard Horsey of the International Crisis Group.

For those still free to fight, there is no room for a repeat of Suu Kyi’s last compromise with the generals.

“It wouldn’t work if we discuss with them,” said one organiser of the sporadic flash mobs still popping up in Yangon.

“They are always armed and oppress people. The people expect to go to overthrow their military dictatorship.” — AFP 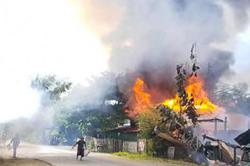