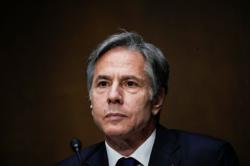 NEW DELHI (Bloomberg): US Secretary of State Antony Blinken kicked off his first official visit to India Wednesday (July 28), warning of "rising global threats to democracy” as the two nations sought common ground in their disputes with China.

India’s border tensions with China, the growing security crisis in Afghanistan triggered by the impending final US troop withdrawal and Covid-19 are likely to be high on the agenda.

In a meeting with civil society leaders in the capital, New Delhi, Blinken referred to threats to democracy, noting it was "vital that we, the world’s two leading democracies, continue to stand together in support of these ideals.”

Blinken met briefly with a representative of Tibetan spiritual leader, the Dalai Lama, during the visit, US representatives said in a statement.

His trip comes as his government vows to challenge what it describes as China’s aggression and while countries across South and South-East Asia battle a surge in Covid-19 amid sluggish vaccination roll-outs.

efense Secretary Lloyd Austin is also in Asia with the message that America was committed to engagement in the region, while stressing that the US and its partners faced a common challenge in China.

"Democracy is a common value of humanity. It not patented by any country,” Chinese Foreign Ministry Spokesman Zhao Lijian said in response to Blinken’s remarks at a regular press briefing Wednesday in Beijing.

"It is not democratic at all to undermine others while portraying oneself as superior.”

Referring to what he described as Beijing’s unwillingness to resolve disputes peacefully, Austin said in a speech in Singapore Tuesday: "We have also seen aggression against India, destabilising military activity and other forms of coercion against the people of Taiwan, and genocide and crimes against humanity against Uyghur Muslims in Xinjiang.”

Ties between the US and India have warmed in recent years as the two nations share converging interests over China’s actions in the region.

The Biden administration has spent more time on India in the first six months than previous administrations, with Blinken’s being the third high level in-person visit, said Tanvi Madan, director of The India Project at the Washington-based Brookings Institution.

His meeting with civil society leaders "signalled to audiences back home that he wasn’t setting aside the values component, to Indians that democracy and pluralism were integral to the relationship, and to China with the inclusion of the head of an organisation linked to the Dalai Lama,” Madan said.

Still, there have been concerns in Washington over the deteriorating human rights landscape in the South Asian nation. Dean Thompson, acting assistant secretary of state for South and Central Asian Affairs, said Friday Blinken would raise those issues during his visit.

Since Modi came to power in 2014, hard-liners in his Bharatiya Janata Party have become increasingly emboldened in promoting the dominance of Hindus, who form 80% of the population.

A restrictive new citizenship law that’s seen to target the country’s 170 million Muslims, along with a deadly crackdown on protests against the move are two key pressure points, as well as intensifying government pressure on the media.

"The broader trend of India potentially becoming an illiberal democracy is potentially problematic for the Biden administration, especially as it continues to emphasize shared values as the tie that binds like-minded democratic countries together against autocracies,” said Derek Grossman, senior defense analyst at RAND Corp think tank.

"India under Modi has increasingly become a Hindu nationalist state that has not always treated minorities well, and that is something that progressive factions with the Democratic Party have noticed and may push President Biden on in the future.”