TOKYO (AFP): A tropical storm churned towards Japan and the Olympic Games on Tuesday (July 27), whipping up welcome waves for surfing medal hopefuls but disrupting other events with rain and strong winds.

Olympic organisers have rescheduled rowing and archery over concerns about high winds from Tropical Storm Nepartak, which is packing gusts of up to 108 kilometres (67 miles) an hour.

The storm, currently around 190 kilometres (118 miles) east of Choshi city, was originally headed for Tokyo, but has shifted north and is now expected to make landfall around the Miyagi region early on Wednesday.

Miyagi and neighbouring Ibaraki are hosting several Olympic events -- some of the few that fans are allowed to attend, but organisers said they would not be affected by the storm.

"Games in Miyagi and Ibaraki will be held as scheduled. We expect spectators to come watch too," Tokyo 2020 spokesman Masa Takaya told reporters.

On Tuesday, the approaching storm was already bringing wind and rain to parts of Japan's east coast, making for challenging conditions at the women's triathlon in Tokyo.

The event started 15 minutes late because of the weather and the wet roads slipped up several athletes during the cycling section.

But conditions were better at the surfing competition, taking place east of Tokyo in Chiba.

Organisers decided to squeeze the quarter-finals, semi-finals and medal events of the men's and women's competitions into Tuesday to take advantage of the waves.

Japanese government spokesman Katsunobu Kato told reporters Tuesday that the storm was moving very slowly and already producing strong winds and rough seas along much of the northeast coast.

Kato urged local residents to "pay attention to the latest information about the weather and evacuation orders."

Some train services in the area where the storm will hit have been cancelled, and non-mandatory evacuation orders have been issued around the town of Atami, where heavy rain earlier this month caused a landslide that killed 21 people.

Japan's typhoon season runs from around May to October, peaking in August and September. 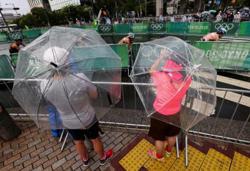