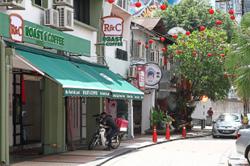 Some of the curbs in Taiwan were eased this month, but the so-called level three alert has been in force and is due to end on July 26. - AP

TAIPEI (Reuters): Taiwan will ease its Covid-19 restrictions from next week though some will remain in place, the government said on Friday (July 23), with rapidly falling case numbers giving authorities confidence to further lower the alert level.

Taiwan implemented restrictions on gatherings, including closing entertainment venues and limiting restaurants to take-out service, in mid-May following a spike in domestic cases after months of no or few cases apart from imported ones.

While some of those curbs were eased this month, the so-called level 3 alert has been in force and is due to end on July 26.

Premier Su Tseng-chang said the alert would be lowered to level 2 from Tuesday.

"The domestic epidemic has gradually stabilised and is heading towards a good direction," Su said.

"Citizens should still strictly follow all pandemic prevention guidance to guard this hard-earned achievement after restrictions are relaxed."

The health ministry will announce details of the new guidance later on Friday, he said.

Taiwan's decision stands in contrast to many of its regional neighbours, like Thailand and Indonesia, where infections, largely driven by the spread of the Delta variant, are spiralling, leading to ever tighter curbs.

Taiwan has never gone into a full lockdown, though its borders remain largely closed apart from to citizens and foreign residence card holders.

Taiwan, whose domestic outbreak was always comparatively small, has reported 15,511 infections since the pandemic began, and 782 deaths.