A bigger drop in the price of retail and other goods was broadly offset by the pickup in private transport and accommodation costs. - ST

SINGAPORE (The Straits Times/ANN): The Monetary Authority of Singapore (MAS) and Ministry of Trade and Industry (MTI) on Friday (July 23) raised their full-year forecast for overall inflation to between 1 per cent and 2 per cent, up from the range of 0.5 per cent to 1.5 per cent previously.

The forecast for core inflation was kept unchanged, at 0 per cent to 1 per cent.

This comes as the latest monthly consumer price data showed that overall or all-items inflation in June remained at a seven-year high of 2.4 per cent - a rate unchanged from May. Consumer prices have now risen for six straight months.

A bigger drop in the price of retail and other goods was broadly offset by the pickup in private transport and accommodation costs, MAS and MTI explained in a joint statement.

However, core inflation - which excludes private transport and accommodation costs - eased to 0.6 per cent in June, down from 0.8 per cent in May, due mainly to the steeper decline in the cost of retail and other goods.

Core inflation in Singapore will continue to gradually increase in the coming quarters, but the return to tighter measures under phase two (heightened alert) will dampen the momentum in underlying inflation, MAS and MTI said.

"Uncertainty in the economic outlook will weigh on consumer sentiment and hence price increases in the near term," they added.

The central bank uses core inflation as a gauge for its exchange rate-based monetary policy.

MAS and MTI also projected that overall inflation should ease in the latter part of the year.

Led by a steeper increase in car prices, private transport inflation jumped 14.9 per cent year on year in June, from 14.5 per cent in May.

Accommodation inflation increased to 1.1 per cent year on year in June, from 0.9 per cent in May, as housing rents rose at a faster pace.

Meanwhile, the cost of retail and other goods fell sharply by 1.8 per cent year on year in June, from 0.8 per cent in May, mostly due to a steeper decline in the price of clothing and footwear.

Electricity and gas expenses also saw a smaller decline of 1.8 per cent, from 1.9 per cent before, as take-up in the Open Electricity Market rose at a slower pace, reducing its dampening effect on electricity prices.

Food inflation came in at 0.9 per cent, from 1 per cent the month before, on the back of lower non-cooked food inflation.

Services inflation remained unchanged at 1.4 per cent from May as lower inflation for point-to-point transport services was broadly offset by higher inflation for tuition and other fees, as well as recreational and cultural services. - The Straits Times/Asia News Network 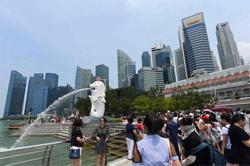