Indonesia's Covid-19 cases started soaring since mid-June, which accompanied with the strictest restrictions on public activities so far, holding the recovery of both domestic and foreign tourism at bay.

Travel agencies have been either downsizing or closed, and some transferred to other business segments to survive.

"All of our clients have cancelled their trips. We're quite busy refunding and rescheduling, " said Oki Kurniawan, owner of a travel agency, in a recent interview with Xinhua. "June was quite good for us, but the PPKM enforced since July brought us back to square one."

In order to curb the recent Covid-19 outbreak, with daily increased cases surpassing 20,000 for several days in a row, the Indonesian government imposed emergency community activity restrictions (locally known as PPKM) in Java and Bali from July 3 to 20.

Shopping malls are closed, as well as schools and worship places. Restaurants only allow takeouts. And full work-from-home is mandatory for businesses in non-essential sectors. Travel for leisure is probably out of the question.

Bahriansyah Momod, secretary general of Association of Indonesian Tours and Travel Agencies (ASITA), told Xinhua that from February to Ramadan, there was a bit of a pick-up in business for travel agencies, but since the end of the fasting month until now, sales have gone downhill again.

During the period of January to May this year, Indonesia recorded 664,550 arrivals of foreign visitors, a 77.62 per cent drop compared to the same period last year, according to Indonesia's Central Agency of Statistics (BPS).

According to ASITA's internal data, out of 1,000 surveyed travel agency members, at least 30 per cent have closed down and stopped all activities due to forced lay-offs.

Furthermore, 65 per cent are still operational albeit without offices and employees, and only 5 per cent claim to still have employees.

The income for Indonesian travel agencies as an industry has dropped by 85 per cent in 2020 compared to 2019. Earlier this year, there was a small increase, but the momentum didn't last long.

Momod said that some of ASITA's members have transferred to other business segments, such as starting the culinary business, using their offices as kitchens, or opening online shops.

In Indonesia's most prestigious tourist destination, Bali, locals who used to work for tourists had to find something else to do.

"Many workers in the tourism sector in Bali were unemployed, " said Putu Astawa, head of Bali Tourism Agency. Most of the laid-off workers travelled back to their villages, and became farmers. Others opened online shops or became vendors at traditional markets.

To save the hard-hit tourism industry, Indonesia is struggling to find a way out.

ASITA is pushing for programmes that quicken the opening of the country's borders. It's now involved in a pilot project in Bali, which will be the first destination with vaccine-based tourism and hopefully can be followed by other islands as well.

Indonesia has long planned to establish travel bubbles with a number of countries and regions. In such a bubble, foreign tourists, already vaccinated and PCR-tested negative, can travel to locations rated safe in Indonesia without self-quarantine.

Despite that the timetable to implement the travel bubble has been postponed, it's still a practical solution at the moment.

Meanwhile, Astawa saw a growing trend of "working from Bali" as an opportunity. These digital nomads, who use telecommunication technologies to earn a living, can be Indonesians or foreigners, who opt to live in Bali to telecommute for a relatively long period of time.

In pre-pandemic times, domestic tourists, on average, was recorded at 16, 000 per day in Bali. It went down during the pandemic, but eventually rebounded to 9,500 visits per day, mainly attributed to the growing of digital nomads. However, due to the recent PPKM, the number dropped again to about 3, 000.

"While waiting for the borders to re-open and the restrictions to loosen, we are making all kinds of preparations, like having hospitality employees fully vaccinated, setting up safety check procedures for incoming tourists, and having hotels and restaurants certified, " said Astawa.

"I believe that the tourism industry in this country will recover to the pre-pandemic level when most people are vaccinated. Let's hope for that day coming sooner, " he said. 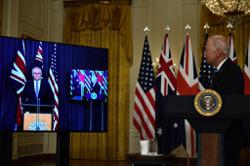