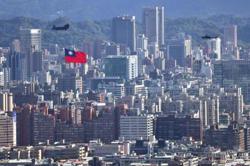 This undated handout photograph released on June 11, 2021 by the China National Space Administration (CNSA) shows an image taken by a camera released from China's Zhurong Mars rover showing the rover (left) and the landing platform on the surface of Mars. - AFP

BEIJING (Reuters): China aims to send its first crewed mission to Mars in 2033, with regular follow-up flights to follow, under a long-term plan to build a permanently inhabited base on the Red Planet and extract its resources.

The ambitious plan, which will intensify a race with the United States to plant humans on Mars, was disclosed in detail for the first time after China landed a robotic rover on Mars in mid-May in its inaugural mission to the planet.

Crewed launches to Mars are planned for 2033, 2035, 2037, 2041 and beyond, the head of China's main rocket maker, Wang Xiaojun, told a space exploration conference in Russia recently by video link.

Before the crewed missions begin, China will send robots to Mars to study possible sites for the base and to build systems to extract resources there, the official China Space News reported on Wednesday (June 23), citing Wang, who is head of the China Academy of Launch Vehicle Technology.

For human inhabitation on Mars, crews would have to be able to use the planet's resources, such as extracting any water beneath its surface, generating oxygen on-site and producing electricity.

China must also develop technology to fly astronauts back to Earth.

An uncrewed round-trip mission to acquire soil samples from the planet is expected by the end of 2030.

The US space agency Nasa has been developing technology to get a crew to Mars and back sometime in the 2030s.

China's Mars plan envisages fleets of spacecraft shuttling between Earth and Mars and major development of its resources, Wang said.

To shorten the travel time, spacecraft would have to tap energy released from nuclear reactions in the form of heat and electricity, in addition to traditional chemical propellants, Wang said.

China would have to accomplish round trips with a total flight time of "a few hundred days", he said.

China is also planning to set up a base in the south pole of the Moon and is deploying robotic expeditions to asteroids and Jupiter around 2030.

Last week, China sent three astronauts to an unfinished space station in its first crewed mission since 2016, expanding its growing near-Earth presence and challenging US leadership in orbital space.