BEIJING (China Daily/ANN): President Xi Jinping underlined on Monday (June 21) the need for China and the European Union to jointly uphold dialogue and cooperation as the mainstream of bilateral relations and mutual benefit as the main theme for bilateral cooperation.

It was a hard-won outcome for China and the EU to secure an uptrend in bilateral relations amid the Covid-19 pandemic last year, and the two sides should make every effort to treasure this outcome, Xi said during a phone conversation with his Finnish counterpart Sauli Niinisto.

Against the backdrop of a fast-changing global landscape and various new global threats and challenges, Xi called for cooperation instead of confrontation and efforts to seek win-win outcomes rather than a zero-sum game.

The president expressed his hope that Finland can play a unique positive role in promoting the healthy and steady development of China-EU relations.

He called on both nations to boost their complementary strengths, and scale up and strengthen bilateral trade, saying that Beijing welcomes more Finnish companies to continue to share the dividends from China's growth.

Beijing is willing to boost bilateral personnel exchanges and conduct more bilateral cooperation in research, science, education and green, low-carbon development, he said, adding that the two sides should jointly respond to challenges from climate change.

China is willing to work with Finland to uphold true multilateralism and jointly cope with global challenges such as public health security and climate change through international cooperation and promote the building of a community with a shared future for mankind, he said.

Niinisto said Finland attaches importance to cooperation with China over the Winter Olympics, and the nation will take an active part in the Beijing Winter Olympics.

He added that Finland will play a positive role in promoting dialogue and cooperation between the EU and China.

Xi also spoke on the phone on Monday with Samia Suluhu Hassan, president of Tanzania, and Denis Sassou Nguesso, president of the Republic of the Congo.

In his conversation with Hassan, Xi noted that Tanzania was the first African country he visited in 2013, when he became Chinese president.

China has always viewed and steered bilateral relations from a strategic and long-term perspective, and the nation will resolutely support Tanzania in following a path of development that suits its national conditions, he said.

The president also stressed the need to expand bilateral cooperation in sectors including agriculture, transportation, communication, tourism and energy, saying that Beijing will encourage and support more Chinese businesses to invest and start new businesses in the African country.

Hassan offered her congratulations on the 100th anniversary of the founding of the Communist Party of China, saying that Tanzania values its traditional friendship with China and appreciates China's support and help.

Tanzania resolutely follows a one-China policy and supports Beijing's position on issues concerning its core interests such as Taiwan, the Hong Kong Special Administrative Region and the Xinjiang Uygur autonomous region, she said.

She also expressed her readiness to jointly promote Belt and Road cooperation with China, strengthen bilateral cooperation in trade and infrastructure and boost people-to-people exchanges.

Speaking with Sassou Nguesso, president of the Republic of the Congo, Xi said bilateral friendship and cooperation have been deepened and brought forward in the joint fight against Covid-19 and joint efforts to promote the resumption of work and production.

Beijing will encourage more Chinese businesses to invest and start new businesses in the African nation, and is ready to further cooperate in areas such as health, agriculture and public livelihoods, he said.

Xi pledged China's vaccine support to the Republic of the Congo, saying that the nation will facilitate its industrialization and economic diversification process.

Sassou Nguesso also offered his congratulations on the upcoming 100th anniversary of the CPC, saying that his country appreciates China's precious support in its fight against the pandemic and in its social and economic development. 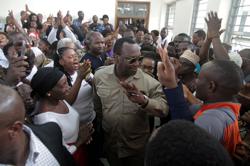