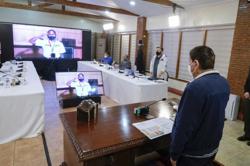 MANILA (Bloomberg): Philippine President Rodrigo Duterte said running for vice president next year is "a good idea, ” his strongest comments yet indicating he may look to stay in a top leadership position after his single term ends.

"There are a lot of people pushing me to run for vice president, ” Duterte, 76, said in a speech on Wednesday.

"It’s a good idea I think, particularly if we talk about the drug problem.”

Still, Duterte said the vice president is "just a flower there until the other wilts.” He also said he would "want a good rest after a grueling” term -- repeating his comments last week that he is keen to retire after his presidency.

Under Philippine law, a president can only be elected for one six-year term.

Duterte’s political party PDP-Laban last month passed a resolution urging Duterte to stand for vice president, a move that could boost his favoured presidential candidate’s chances in the 2022 elections.

Analysts say it may be a way for him to remain in power and immune from criminal charges after his presidency.

Such a move would be counter to the constitution’s intended limits to a president’s term if he pushes through with his vice-presidential bid, said Dan Gatmaytan, who teaches constitutional law at the University of the Philippines.

"I would argue that Duterte’s candidacy would constitute an indirect circumvention of the constitution, the likes of which were stuck down by the Supreme Court in earlier cases, ” Gatmaytan said.

Duterte’s spokesman Harry Roque, however, said last week that "there is absolutely no ban for a president to run for vice president.”

Still, Duterte said he would not run if House Majority Leader Martin Romualdez stands for the office, saying that in 2019 he promised to support the lawmaker.

Duterte’s daughter Sara Duterte, who is mayor of Davao City, was the public’s top choice to succeed him, according to Pulse Asia Research Inc.’s survey of 2,400 adults last quarter. Duterte has opposed the idea of his daughter succeeding him, saying the presidency is not for women.

In an ABS-CBN report Wednesday, Sara Duterte said she will "never” run in tandem with her father, while adding that she is being asked by her allies to "reconsider” her plans for the 2022 presidential elections.

Vice President Leni Robredo has said she’s open to being the opposition’s presidential candidate next year.

Duterte’s comment comes as the prosecutor of the International Criminal Court sought authorization to open an investigation into the Philippine government’s deadly crackdown on drug crime. A preliminary probe started in February 2018 determined there’s reasonable basis to believe that the "crime against humanity of murder” has been committed in the Philippines between July 1, 2016 and March 16, 2019, the date the country withdrew from the court.