JAKARTA (The Jakarta Post/ANN): Jakarta has seen an alarming resurgence of Covid-19 cases in the past week, with officials and experts saying that the capital is now in a “critical phase” and could see a higher spike than the last wave of infections in January.

On Sunday (June 13), Jakarta recorded some 2, 700 new confirmed cases – the highest since February, when the capital saw a surge of infections following the year-end holidays. The city's positivity rate, which is the percentage of positive results from all tests conducted, increased by 8 per cent to 17 per cent in the past week.

With Jakarta health authorities having recently doubled the city's testing rate to around 75, 000 people daily on a seven-day average – almost eight times the minimum rate that the World Health Organization (WHO) recommends – the high positivity rate indicates that virus transmission has significantly increased among the population.

Active cases in Jakarta have also increased by 50 per cent in the past week from 11, 500 to 17, 400 cases, causing hospital beds to fill up fast with Covid-19 patients.

Within a one-week period, the bed occupancy rate (BOR) in Jakarta increased from 45 to 75 per cent. The BOR at the emergency Covid-19 hospital set up in the former athletes village in Kemayoran, Central Jakarta, reached 83 per cent on Monday, with 5, 028 out of its 5, 994 beds being occupied.

“We have prepared 2, 000 more beds to anticipate the surge in patients. Usually one room has two beds but if necessary we'll put three beds in a room, ” he said on Saturday, as quoted by Kompas.com.

“If the additional beds are not enough to accommodate the Covid-19 patients, we'll use two buildings that are usually used to quarantine people who have just returned from other countries, ” he added.

At the Pasar Minggu Regional Hospital (RSUD) in South Jakarta, just 15 of its 215 beds for Covid-19 patients were vacant, deputy financial and general affairs director Yeni Restuti said as of Sunday.

“Our bed occupancy rate has reached 80 percent, ” Yeni said, as reported by Tribunnews.com.

Jakarta Governor Anies Baswedan said the capital was entering “a very critical phase” and warned that health facilities might be at a risk of collapsing, as happened in February when the city recorded its highest case spike.

“We need to do something; we need to be more serious in enforcing health protocols and [authorities] need to take action against people who violate health rules, ” he said on Sunday.

The governor has urged Jakartans to be more disciplined in abiding with Covid-19 measures. - The Jakarta Post/Asia News Network 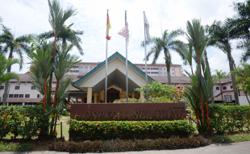