A man wearing a protective face mask, amid the coronavirus disease (Covid-19) pandemic, pushes a cart loaded with sacks of garbage, in Manila, Philippines, June 11, 2021. - Reuters

The death toll climbed to 22, 788 after 137 more patients died from the viral disease, the DOH said.

The Philippines, which has a more than 110 million population, has tested more than 13 million people since the outbreak in January 2020.

The government has been ramping up the vaccination drive with the aim to inoculate up to 70 million people this year, and more than 1.68 million people have been fully vaccinated so far.

Last week, the government started inoculating essential workers, hoping to bring the economy back on track.

"The added protection against COVID-19 will give our workers more confidence to go out and earn a living while reducing virus transmission to their families," Socioeconomic Planning Secretary Karl Kendrick Chua said.

Meanwhile, incoming international flights were back at Mactan-Cebu International Airport (MCIA) as of Sunday, June 13.

Napuli said at least two flights from abroad would be expected to land at the airport on Sunday. These flights are from Singapore via Scoot, and from South Korea via JinAir.- Xinhua 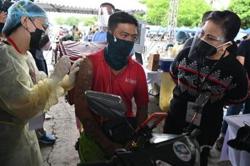