A police officer receives his first dose of Sinovac Biotech’s CoronaVac vaccine for the coronavirus disease (Covid-19) during the vaccination of essential workers, at the Navotas Fish Port, in Navotas City, Metro Manila, Philippines, June 10, 2021. - Reuters

MANILA, June 11 (Bloomberg): The rise in Philippine exports and imports undershot economists’ expectations in April after Covid-related mobility restrictions were reimposed to stem a surge in cases.

Exports rose 72.1% in April from a year ago to $5.7 billion, according to the statistics authority. The increase -- largely due to last year’s slump when the country was in a strict lockdown -- was below the 90.4% median estimate in a Bloomberg survey. Exports were down about 16% from March.

"The lockdowns significantly reduced business or economic activities, ” said Michael Ricafort, an economist at Rizal Commercial Banking Corp. Efforts to reopen the economy could boost trade in the coming months, he said.

Imports increased 140.9% on-year in April, below the 146.9% rise economists forecast. Inbound shipments were down 11.3% from March. The trade deficit was $2.7 billion, wider than the $2.4 billion projection.

The Philippines is tipped to be among the slowest to recover in Asia, as it struggles to contain the pandemic. A spike in coronavirus infections prompted tighter curbs in late March in the capital region and surrounding areas, which are key exports manufacturing centers. Restrictions have been eased.

"Low base effects skewed” April’s trade figures and will "continue to do so in the coming months, ” said Sophia Ng, an analyst at MUFG Bank Ltd. in Singapore. 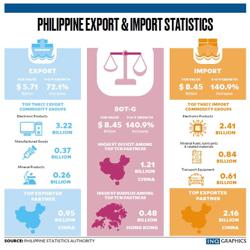