A health worker administers the Sinovac vaccine to a woman in Phnom Penh on June 2. - Phnom Penh Post/ANN

PHNOM PENH, June 11 (Phnom Penh Post/ANN): The government is on track to wrap up its Covid-19 vaccination campaign in Phnom Penh next month with more than two million people inoculated, according to Ministry of Health spokeswoman Or Vandine.

Vandine, who is also head of the national Covid-19 vaccination commission, said during an inspection in the capital's various districts on June 10 that the immunisation drive was being accelerated to meet the target.

"In July at the latest, we will wrap up the campaign in the 14 districts of Phnom Penh. As of June 9, more than 1.7 million in the capital had been inoculated. The more than 250,000 residents in the remaining three districts will receive the jabs [soon]," she said.

As of June 10, Cambodia had vaccinated nearly 2.8 million people nationwide, or 27.95 per cent of the targeted 10 million.

Cambodia on Friday confirmed 655 new Covid-19 cases, pushing the national tally to 37,321, the Ministry of Health (MoH) said in a statement.

Eleven more fatalities had been reported, bringing the death toll to 311, the ministry said, adding that 810 patients had recovered, taking the total number of recoveries to 30,617.

To date, some 2.8 million out of the 10 million targeted population have received the first Covid-19 vaccine dose, MoH's secretary of state and spokeswoman Or Vandine said, adding that 2.33 million of them have been fully vaccinated with two doses. - Phnom Penh Post/ANN 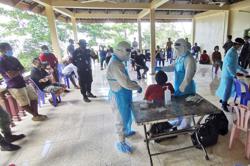