Health workers spray disinfectant to sanitiSe a resident as a preventive measure against the coronavirus in Phnom Penh's Por Sen Chey district on June 9, 2021. - FACEBOOK

PHNOM PENH (Xinhua): Cambodia's death toll from Covid-19 has risen to 300 on Thursday (June 10) after 11 new fatalities were reported in the last 24 hours, the Ministry of Health (MoH) said in a statement.

Meanwhile, the kingdom also saw 760 patients recovered, taking the total number of recoveries to 29, 807, it added.

Cambodia has been suffering the third wave of Covid-19 community transmissions since Feb 20. In a bid to flatten the infection curve, the country has closed down all schools, fitness centers, museums, cinemas, and entertainment venues nationwide.

The country began a Covid-19 inoculation drive on Feb 10.

To date, more than 2.77 million out of the 10 million targeted population have received their first COVID-19 vaccine dose, MoH's secretary of state and spokeswoman Or Vandine said, adding that some 2.28 million of them have been fully vaccinated with two doses. 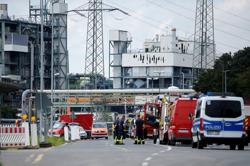