Company-funded vaccinations for workers rolled out 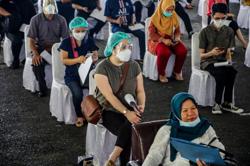 INDONESIA is stepping up its vaccination programme with the start of company-funded inoculations for employees.

Workers in labour-intensive industries such as food and petrochemicals will be the first to receive their vaccinations under the roll-out, as the country casts its eye on maintaining its economic output.

He was speaking during an online broadcast of a vaccination exercise held at 18 locations at an industrial estate in West Java province.

Each company will be administering between 2,000 and 4,000 shots for their respective workers.

The private inoculation programme will complement Indonesia’s free vaccines for the public.

The country started its vaccination drive in January, focusing on high-priority groups such as health workers, the police and military.

This free vaccine programme will officially be expanded to the public by July.

Jokowi said Indonesia, like other nations, was facing an increasing challenge in procuring vaccines.

He added that for the private vaccine programme, Indonesia had so far received a shipment of only 420,000 doses, from the 30 million commitment it had received from makers.

Jokowi said in his speech yesterday: “Up to now, we have put 23 million vaccine doses into arms, from a target of 380 million doses.”

May 4 was 4.64%, according to ourworldindata.org and SDG-Tracker, a joint effort between the University of Oxford and non-profit group Global Change Data Lab.

The figure for Indonesia is the highest among countries in South-East Asia with a population of more than 20 million.

The private vaccine programme was expected to help Indonesia to reach herd immunity faster, Jokowi said, adding that the nation aimed to inoculate a total of 181.5 million, or 67%, of its 270 million population by 2022. — The Straits Times/ANN