Viktor Axelsen of Denmark, among the best players in the world, was supposed to take part in this year's Singapore Open. - AP

SINGAPORE, May 12, 2021 (AFP): The Singapore Open, which offer US$320,00 in prize money and the last remaining badminton qualifying tournament for the Tokyo Olympics, has been cancelled due to the coronavirus pandemic, organisers have announced.

The tournament, which was scheduled for June 1-6, will not be rescheduled, the Badminton World Federation (BWF) said in a statement.

"All attempts were made by the organisers and BWF to provide a safe tournament environment for all participants."

It added that it would issue a further statement on Olympic games qualifying at a later date.

Singapore's infection numbers have been very low compared to the rest of the world but officials last week banned spectators at sporting events and tightened travel curbs after discovering several new clusters.

As with other sports, the badminton calendar has been thrown into chaos due to the pandemic, with many events cancelled worldwide in the past year. 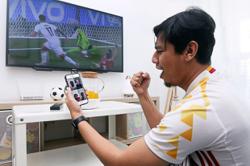