JAKARTA, May 10 (Reuters): Indonesian authorities have arrested Papuan independence leader Victor Yeimo (pic) over accusations that he orchestrated some of the most serious civil unrest in decades that broke out in 2019, police said on Monday.

Tension has reignited in recent weeks in Indonesia's easternmost provinces, with President Joko Widodo calling for a crackdown after a senior intelligence figure was shot dead late last month, and with an additional 400 troops deployed there.

Yeimo, 38, who is the international spokesman of the West Papua National Committee, was arrested in the provincial capital of Jayapura on Sunday and is being questioned, said national police spokesman Iqbal Alqudusy.

Police accuse Yeimo of being the "mastermind" behind the civil unrest and of committing treason, as well as inciting violence and social unrest, insulting the national flag and anthem, and carrying weapons without a permit.

Emanuel Gobay, one of a group of Papuan lawyers representing Yeimo, said his client had not yet been officially charged. Treason can carry a sentence of life in jail.

Protests convulsed Indonesia's provinces of Papua and West Papua, on the island of New Guinea - collectively known as Papua - for several weeks in August 2019.

The sometimes violent unrest erupted after a mob taunted Papuan students in Surabaya, Indonesia’s second city on the island of Java, with racial epithets, calling them "monkeys", over accusations they had desecrated a national flag.

The 2019 protests also spurred calls for independence from Indonesia.

Papuan separatists have pushed for independence for decades, saying a 1969 vote overseen by the United Nations that brought the region under Indonesian control was illegitimate. Indonesia rejects the claims.

In a development that has alarmed rights activists, Indonesia's chief security minister has announced that armed Papuan separatists can be legally designated "terrorists", and prosecuted under the counterrorism law.

"Since the news broke that he (Yeimo) was arrested, many West Papuans have already announced that they will take to the streets to demand his release," she said. - Reuters
Article type: metered
User Type: anonymous web
User Status:
Campaign ID: 46
Cxense type: free
User access status: 3 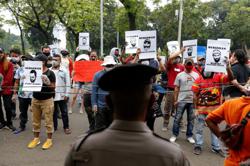