This handout photo taken and released by Dawei Watch on May 7, 2021 shows protesters holding up signs supporting the "People's Defence Force" set up by the shadow government of ousted Myanmar lawmakers. - AFP

YANGON, NEW YORK (Reuters/AFP): Myanmar's ruling junta is focusing on creating a stable situation in the country before agreeing to allow a visit by a South-east Asian envoy, as part of a five-point consensus agreed by regional leaders last month, an official said on Friday (May 7).

Major Kaung Htet San, a spokesman for the ruling military council, told a televised briefing that Asean, of which Myanmar is a member, wanted to send a special representative and Myanmar would "cooperate regarding that envoy" when a certain level of security and stability had been achieved.

The UN Security Council had previously called for an immediate end to violence in Myanmar as stated in an Asean plan, giving unanimous approval to a statement watered down to satisfy China and Russia.

The plan, which also calls for the naming of an envoy from Asean to address the crisis triggered by the Feb 1 military coup, should be applied "without delay", the council statement says.

It was approved after a closed-door meeting of the council and forced Western countries to make concessions to China - Myanmar's main backer - and Russia to win passage.

At their request the council eliminated clauses that said it "once again strongly condemned violence against peaceful protestors" and "reiterated their call on the military to exercise utmost restraint". 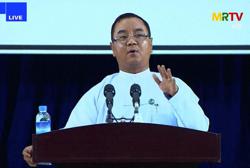