Indonesia in a day: Taman Mini is a Disney-style 146ha park in Jakarta that is run by Suharto’s (inset) family. — The Straits Times/ANN

A Singaporean management consulting company is suing the children of Indonesia’s former president Suharto, seeking millions in compensation as well as land in a case thought to have hastened the loss of one of the former ruling clan’s prized businesses.

A Disney-style 146ha park, Taman Mini dates back to the 1970s and was the brainchild of Suharto’s wife Siti Hartinah, also known as Ibu Tien.With its pavilions, bumper cars and man-made lake festooned with islands in the shape of the archipelago, the park gives visitors a chance to “go around Indonesia in a day”, as billboards there promise.

But just weeks after the suit was lodged in court, the government of President Joko Widodo seized control of Taman Mini, which sits on government land, arguing that the Suharto foundation that ran the amusement park, Harapan Kita, had failed to pay taxes since it opened in 1977.

Mitora’s relationship with Harapan Kita is unclear, though media reports suggest the consultancy had been hired to do redevelopment work on portions of Taman Mini.

Taman Mini loses as much as 50 billion rupiah (RM14mil) a year, the government said.

Wedged into the most densely populated city in South-East Asia, the land and business is worth 20 trillion rupiah (RM5.6bil) by the government’s measure.

Unaudited and opaque, the park amounts to a business yielding steady income to the Suhartos, say anti-corruption activists. Its sudden loss underscores the family’s fall from the pinnacle of power during the patriarch’s 32 years in power.

“It’s a huge loss to the Suhartos, ” said Adnan Topan Husodo, coordinator with Indonesian Corruption Watch. “It shows that they no longer have a grip on politics.”

With its fairytale castle, waterpark, shady picnic areas and museums, Taman Mini is a staple for Indonesian households and schools looking for an affordable day out. — The Straits Times/ANN 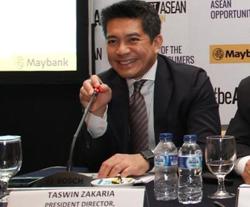