A family wears protective masks as they ride a motorbike in the street amid the coronavirus disease (Covid-19) outbreak in Hanoi, Vietnam. The country reported its first local case in 35 days on Thursday night (April 20, 2021). - Reuters

HANOI, April 30 (Reuters/AFP): Vietnam said has announced that it had detected its first locally transmitted cases of the coronavirus in 35 days, as authorities ordered tighter surveillance to prevent a new outbreak.

Four members of a family in northern Ha Nam province and one person in southern Ho Chi Minh City were infected, the health ministry said, having all been in contact with an individual who had returned from Japan and tested positive, despite clearing quarantine.

With its strict quarantine and tracking measures, Vietnam has successfully contained its three outbreaks of the virus so far and now is ramping up measures to prevent a fourth, as other countries in the region see sharp rises in cases.

The South-East Asian nation of nearly 98 million people has reported just 2,910 cases and 35 deaths overall, one of the best records in Asia, owing to its quick response to outbreaks.

The infections come ahead of a four days of holidays that begin Friday and as neighbouring Laos and Cambodia and nearby Thailand report big jumps in cases.

Meanwhile, Vietnam has detected four cases of a Covid-19 variant believed to be behind a devastating surge of the virus in India, state media said Thursday (April 29).

Vietnam has so far kept case numbers low -- reporting 2,910 of them and 35 deaths -- thanks to mass quarantines and extensive contact tracing.

All four of those infected with the B.1.617 variant of Covid-19, which was first found in India, had recently traveled from the South Asian country and were quarantined upon arrival in Vietnam.

"The genetic sequencing results of four out of five Covid-19 patients arriving from India showed that the patients have been infected with the Indian strain of the virus," Lao Dong newspaper said Thursday.

The discovery of the variant came as more than 1,000 people in a village in Ha Nam province, close to Hanoi, were put under lockdown on Thursday.

But the country has been on high alert after a spiralling outbreak in parts of South-East Asia including Cambodia and Laos, which both share a border with Vietnam. 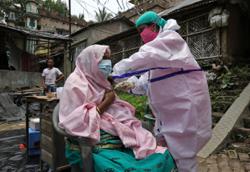 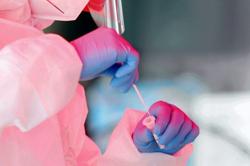