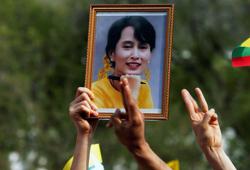 Anti-coup protesters flash the three-finger salute, holding banner read " Yangon Strike will defeat all enemies" during a demonstration against the military coup in Yangon, Myanmar, on Monday, April 26, 2021. Asean leaders have demanded an immediate end to killings and the release of political detainees in Myanmar during an emergency summit in Jakarta with its top general and coup leader. - AP

YANGON, April 26 (AFP): Myanmar's junta again postponed court proceedings against deposed leader Aung San Suu Kyi on Monday her lawyers said, as they fight for permission to visit her 12 weeks after she was detained.

Myanmar has been in turmoil since the military ousted the Nobel laureate in a February 1 coup, shunting the country back into junta rule after a brief experiment with democracy.

Large swathes of the population have taken to the streets in protest, with security forces unleashing a brutal campaign to quell the massive uprising.

Meanwhile Suu Kyi has been under house arrest, with the junta charging her under six cases -- including for sedition and having unlicensed walkie-talkies.

But movement on her case was once again delayed until May 10, her lawyer Min Min Soe said Monday after a hearing.

Twelve weeks since Suu Kyi was detained, Min Min Soe said they still have not received permission to meet their client face-to-face -- one of many hurdles the team has faced.

"When the judge asked (police) which stage they have reached, they replied they couldn't tell specifically," she told AFP, adding that Suu Kyi was frustrated by the slow pace.

"I think she is not getting access to watch news and TV. I do not think she knows the current situation happening in the country," she said.

Besides not being able to meet with Suu Kyi, junta-imposed mobile data shutdowns have also prevented video-conferencing in previous hearings.

The most serious charge Suu Kyi faces falls under Myanmar's official secrets law, with a hearing due in Yangon on May 6.

The junta has justified its power grab by claiming it is protecting democracy, alleging electoral fraud in November elections which the NLD won in a landslide.

Since the coup, security forces have killed more than 750 people, according to a local monitoring group. 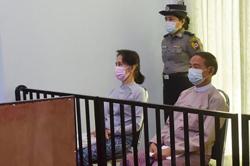